The IPCC’s latest: As climate damages ramp up, the window of opportunity to adapt is closing fast

The contribution of Working Group II to the IPCC’s Sixth Assessment report, which focuses on the impacts of climate change on humans and natural ecosystems, as well as the potential for adaptation, makes two things clear. First, the risks of climate change to human and natural systems are more severe – and more imminent – than previously recognized. Second, investments in adaptation can help increase resilience to those risks, but right now we are woefully underprepared for the impacts we are already experiencing, let alone those to come. Put those two conclusions together, and you have a picture of a narrow window of opportunity for adaptation that is closing fast.

The WGII report is grounded in, and builds on, conclusions from the report of Working Group I last August, which addressed the physical science of climate change. One key conclusion from that earlier report was that advances in scientific understanding, along with the data provided by continued warming, allow scientists to attribute the severity and intensity of many individual extreme weather events to climate change with a high degree of confidence. In the same way, continued experience with a warming planet has given scientists more evidence and data to understand the full scope of the impacts of climate change on humans and natural ecosystems.

At the most basic level, the latest report confirms what we already know: The damages from climate change are occurring already, in every part of the world. Indeed, the very obviousness of those damages is part of the reason that the report itself can be so definitive: As human activity continues to heat the planet, the evidence of the consequences is accumulating and becoming impossible to ignore. Climate change has increased to the point that the average person experiences its impacts—either directly or simply by reading the news—in the form of record-setting wildfires or heat waves, more severe flooding or drought, or more intense hurricanes. By the same token, there is that much more data for scientists to sift through and analyze. We continue to run an uncontrolled experiment on the planet’s future, and the results are coming in. We can now discern the signal from the noise. That is the context of this report.

The first main takeaway from the new report is: The risks of severe impacts from climate change have increased across the board since the IPCC’s previous assessment report, published in 2014. Those risks are greater than previously understood at temperature levels we have already reached or are rapidly approaching.

Taken together with the findings of WGI, this conclusion underscores a sobering reality: We are on a collision course with catastrophic climate change, with the risks becoming more severe as they come into view, even as we continue to drive temperatures up by emitting greenhouse gases into the atmosphere. 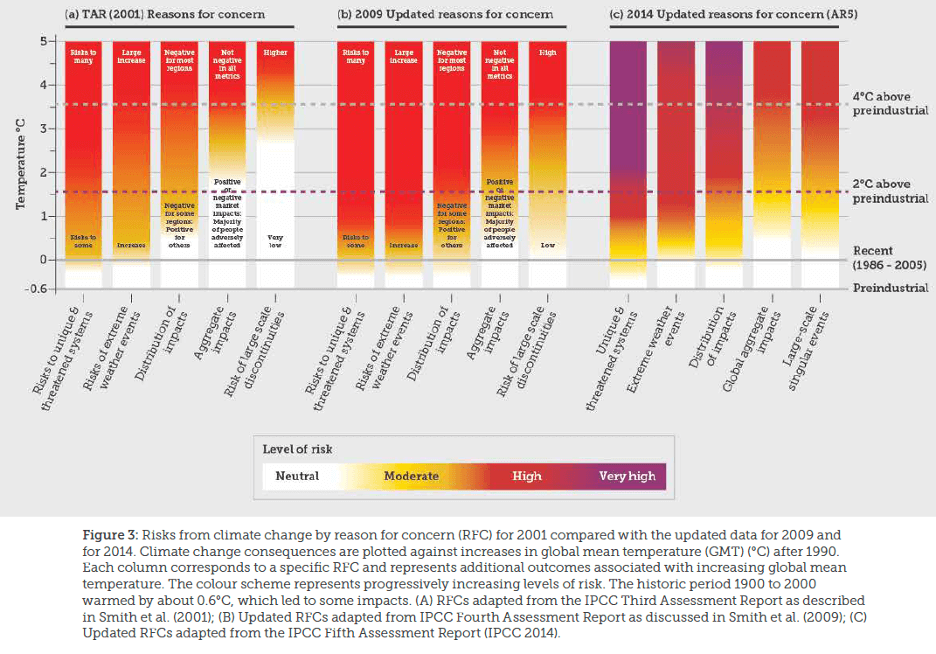 The latest version of that diagram, presented in the Summary for Policymakers of the new report as Figure SPM.3 (and also as Figure 16.15 in Chapter 16), continues that trend: across all categories of impacts, the estimated risk is now “high” starting at temperatures around 2 degrees C above pre-industrial levels—less than a degree above today’s temperatures (see below). Moreover, the estimated risk to unique and threatened ecosystems (labeled “RFC1” in the chart) is now “high” even at current temperatures and becomes “severe” at temperatures below 2 degrees above preindustrial levels. The risks from extreme weather events (“RFC2”) are almost as immediate. 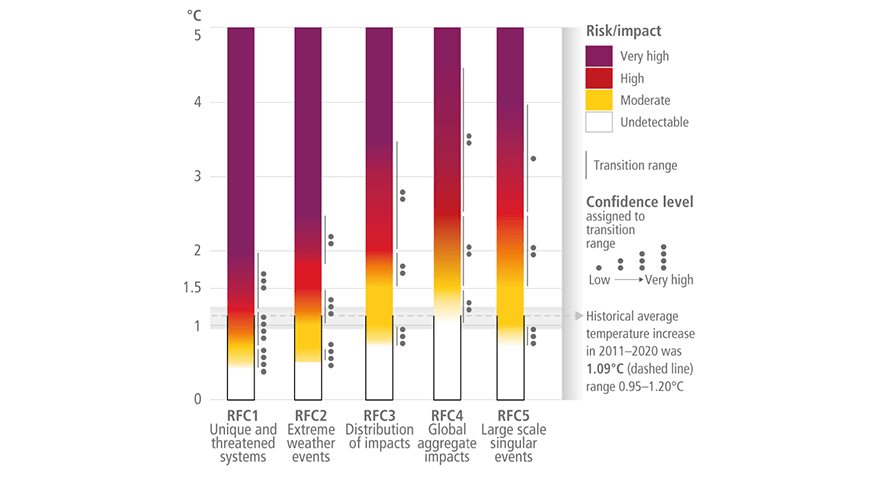 In interpreting the successive “burning embers” diagrams, it is important to recognize that the vertical axis is held constant. What is changing is our assessment of the risks. Looking at the evolution of the diagrams over time, the implication is clear: At any given temperature above pre-industrial levels, the estimated risks are becoming more severe. This result is driven primarily by our greater understanding of the underlying science of attribution (WGI) as well as the accumulated evidence of impacts. As human activity continues to heat the planet, scientists can collect more and more information about the scope and severity of resulting impacts, and the risks are coming more sharply into view.

Three examples of this dynamic are:

All three of those examples are highlighted in the report, which for the first time “unpacks” the reasons for concern into similar diagrams to show risks to specific types of ecosystems and particular regions. But the trends are much broader. Indeed, the new WGII report makes clear that the damages already observed from climate change are costly and widespread across the globe. This conclusion follows directly on the finding in last August’s report that human-influenced changes in weather and climate extremes are already affecting every inhabited region on the planet.

The report’s second main takeaway contains a glimmer of hope, but also an urgent call for action: While the damages from climate change are already apparent and projected to increase further, there are still steps we can take to respond. Investments in adaptation can increase resilience and reduce the damages we will see in the future, by blunting the impacts of climate change—but those investments must increase dramatically.

The report finds that adaptation can be effective. But it also makes clear that adaptation efforts to date have not prepared us for the impacts we are already seeing. Much more is needed to protect communities around the world—especially the small-island states and least developed countries that are most vulnerable to the impacts of climate change and have contributed the least to it.

The window of opportunity for adaptation investments to prepare for the climate impacts to come is closing fast. In the race between more severe impacts and the investments in adaptation needed to deal with them, adaptation is losing. We can change that equation, but to do so will require concerted effort and resources now and in the critical coming decade.

For too long, there was concern among many in the climate community that highlighting the acute need for investment in adaptation would undermine the importance of reducing emissions. This report should put that debate to rest for good: We urgently need both a dramatic increase in investments in adaptation and immediate reductions in greenhouse gas emissions.