Scientists expect these trends to continue as the planet warms. For each degree Celsius of warming, the air’s capacity for water vapor goes up by about 7 percent. An atmosphere with more moisture can produce more intense precipitation events, which is exactly what has been observed. 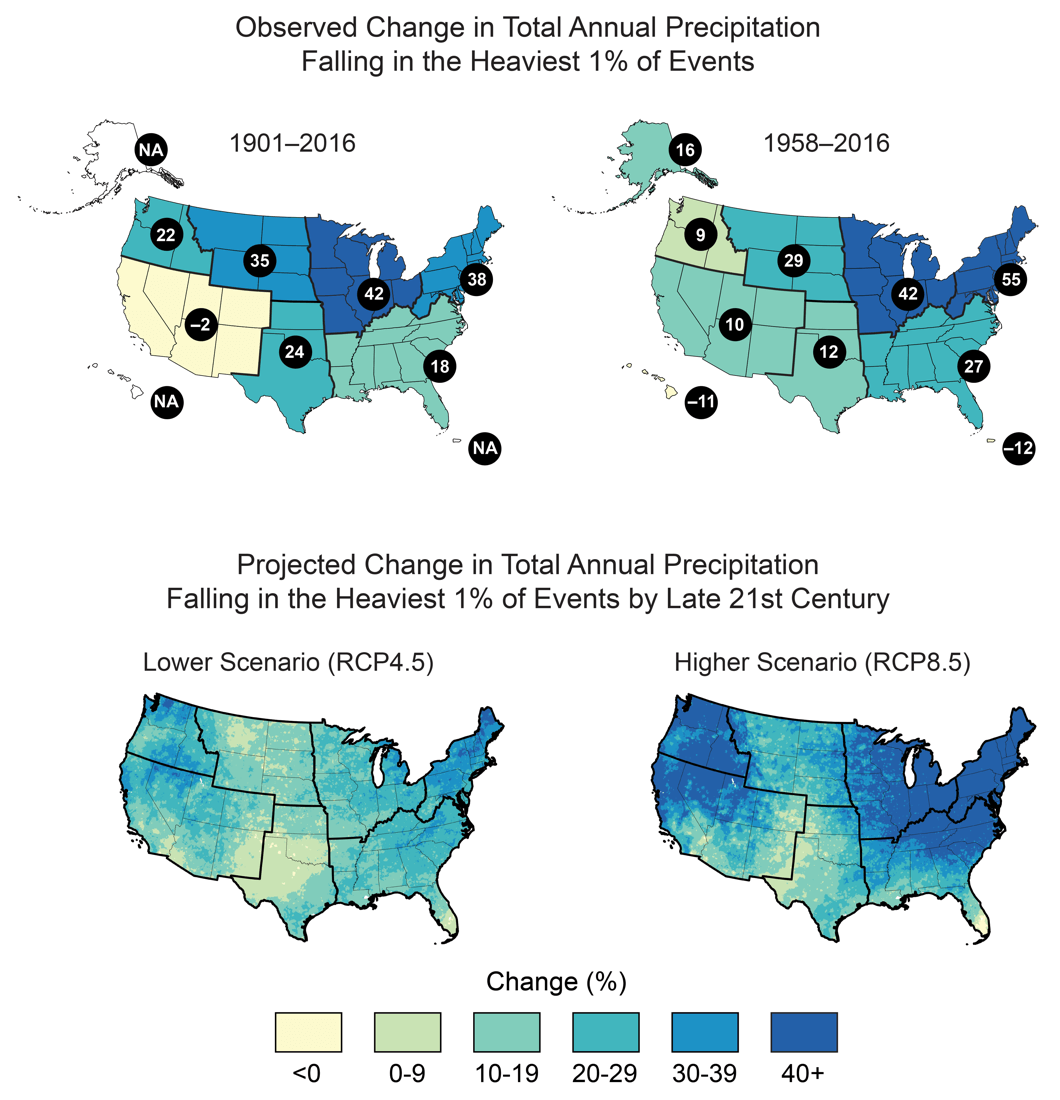 This map shows the observed (top) and projected (bottom) change in the amount of precipitation falling in the heaviest 1% of events (99th percentile of the distribution). The numbers in black circles for the observed show the percentage change and illustrate that most of the increase in heavy precipitation events since 1901 has occurred in the last ~60 years. The projected amounts show two climate change scenarios, called Representative Concentration Pathways (RCPs): the map on the left is based on a lower amount of greenhouse gas emissions while the map on the right shows a higher concentration emissions scenario.

The most immediate impact of heavy precipitation is the potential of flooding. This risk can be heightened in urban areas where non-permeable pavement forces water to quickly run off into sewer systems.

Excessive precipitation can also degrade water quality, harming human health, aquatic ecosystems, and fishery operations. Stormwater runoff, which often includes pollutants like heavy metals, pesticides, nitrogen, and phosphorus, can end up in lakes, streams, and bays. This is an issue especially in the many cities in the United States that use a combined sewer system, where both stormwater and wastewater are mixed, treated, and released. Heavy rainfall can overwhelm such systems, sending excess stormwater, wastewater, and untreated sewage directly into bodies of water.

In addition to flooding, heavy precipitation also increases the risk of landslides. This occurs when above-normal precipitation raises the water table and saturates the ground, causing slopes to lose their stability. Washington state, which has a particularly high risk of landslides due to its terrain, anticipates they will become more frequent as a result of climate change-induced increases in heavy downpours.

Many small businesses are not aware of the risks they face from changing climate conditions, and may not have plans in place to respond and recover from weather events. This issue is especially important in Maryland, where small businesses—defined as …

A year after a devastating flood, lessons in building resilience

Cities and businesses are separately preparing for climate change and building their resilience to impacts. But they have not had guidance on how to work together, until now. This report lays out the value in public-private collaboration on city climate …

Turning disaster into an opportunity for flood resilience