Climate change has been a key factor in increasing the risk and extent of wildfires in the Western United States. Wildfire risk depends on a number of factors, including temperature, soil moisture, and the presence of trees, shrubs, and other potential fuel. All these factors have strong direct or indirect ties to climate variability and climate change. Climate change enhances the drying of organic matter in forests (the material that burns and spreads wildfire), and has doubled the number of large fires between 1984 and 2015 in the western United States.

Research shows that changes in climate create warmer, drier conditions. Increased drought, and a longer fire season are boosting these increases in wildfire risk. For much of the U.S. West, projections show that an average annual 1 degree C temperature increase would increase the median burned area per year as much as 600 percent in some types of forests. In the Southeastern United States modeling suggests increased fire risk and a longer fire season, with at least a 30 percent increase from 2011 in the area burned by lightning-ignited wildfire by 2060.

Once a fire starts—more than 80 percent of U.S. wildfires are caused by people—warmer temperatures and drier conditions can help fires spread and make them harder to put out. Warmer, drier conditions also contribute to the spread of the mountain pine beetle and other insects that can weaken or kill trees, building up the fuels in a forest.

Land use and forest management also affect wildfire risk. Changes in climate add to these factors and are expected to continue to increase the area affected by wildfires in the United States. 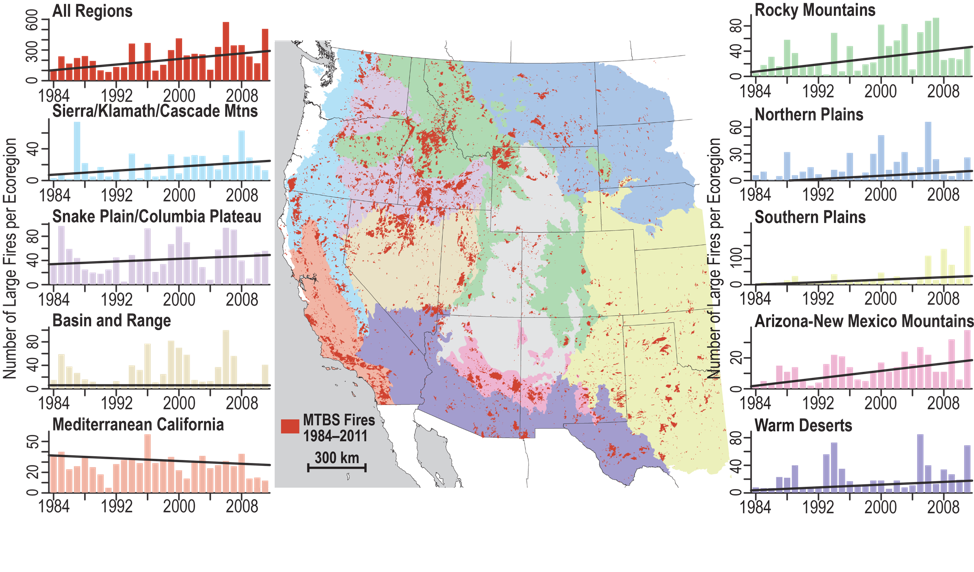 This graphic from the Fourth National Climate Assessment shows the growth in large wildfires throughout the West. The black lines are fitted trend lines. Statistically significant at a 10% level for all regions except the Snake Plain/Columbian Plateau, Basin and Range, and Mediterranean California regions.

Since 2000, 15 forest fires in the United States have caused at least $1 billion in damages each, mainly from the loss of homes and infrastructure, along with firefighting costs. The 2017 wildfire season was well above average, with deadly fires in California and throughout the West, including Montana, Oregon, and Washington state. The 2018 wildfire season went on to also break records as the deadliest and most destructive season on record in California. NOAA estimates the total costs of wildfires in 2017 and 2018 to be more than $40 billion. In 2019, wildfires caused an estimated $4.5 billion in damages in California and Alaska. Alaska’s record-breaking heat and dry conditions over the summer months set the conditions for the state’s historic wildfire season. In 2020, five of the six largest fires on record burned in California and Oregon saw historic levels of wildfire spread and damage. Wildfires across the West led to weeks-long periods of unhealthy air quality levels for millions of people.

For more details on wildfire resilience, read our report, Resilience Strategies for Wildfire.

Learn more about resilience by visiting our Climate Resilience Portal.

The risk of wildfire is expected to grow across the United States due to reduced precipitation in some regions, and higher temperatures caused by climate change. Wildfire has far-reaching impacts that can ripple through communities, regions, watersheds, and ecosystems. This …

Across the United States, the risk of drought is expected to grow due to reduced precipitation and higher temperatures caused by climate change. Drought’s far-reaching impacts can ripple through communities, regions, watersheds, economies and ecosystems. This fact sheet overviews strategies …