Efforts to address climate change should focus not only on substantially reducing carbon dioxide emissions, but also on actions to reduce those climate pollutants that remain in the atmosphere for much shorter periods of time. Despite their short atmospheric lifetimes, short-lived climate pollutants (SLCPs)—such as black carbon, methane, tropospheric (ground-level) ozone, and hydrofluorocarbons— have a high global warming potential. This means that, per molecule, they can warm the Earth faster than carbon dioxide. SLCPs are the second largest contributor to human-caused climate warming after carbon dioxide, contributing up to 45 percent of global warming to date, and targeted efforts to reduce SLCP emissions could slow the pace of global warming by 0.6 degrees C by 2050. In addition, many of these short-lived climate pollutants are also air pollutants, which are harmful for human and plant health. The United Nations Environment Program and the World Meteorological Organization estimate that specific reductions in methane and black carbon emitting activities could save 2.4 million lives in the year 2030 alone. It is important to note that some SLCPs are emitted alongside gases and aerosols that have a cooling effect. Careful consideration of actions to decrease SLCP emissions to reduce climate warming and improve public health, along with aggressive reductions in carbon dioxide, will reduce the chances of increased warming while phasing out SLCP emissions.

The pie chart above illustrates the 2018 U.S. human-created greenhouse gas emissions and does not include natural sources and sinks of greenhouse gases. Fluorinated gases, methane, and nitrous oxide have a large impact on global warming despite being a small percentage of emitted greenhouse gases. Hydrofluorocarbons (HFCs), one of the fluorinated gases (the others are perfluorocarbons, sulfur hexafluoride, and nitrogen trifluoride), along with methane are considered SLCPs due to their short lifetimes in the atmosphere. Black carbon is not shown in the chart because it is an aerosol, not a gas, and tropospheric ozone is not shown in the chart because it is created in the atmosphere from ultraviolet light interacting with nitrogen oxides, carbon monoxide, volatile organic compounds, and methane.

The most significant short-lived climate pollutants are black carbon, methane, tropospheric ozone, and hydrofluorocarbons, due to their atmospheric impacts as depicted in the below figure. They primarily come from fossil fuel production and combustion. 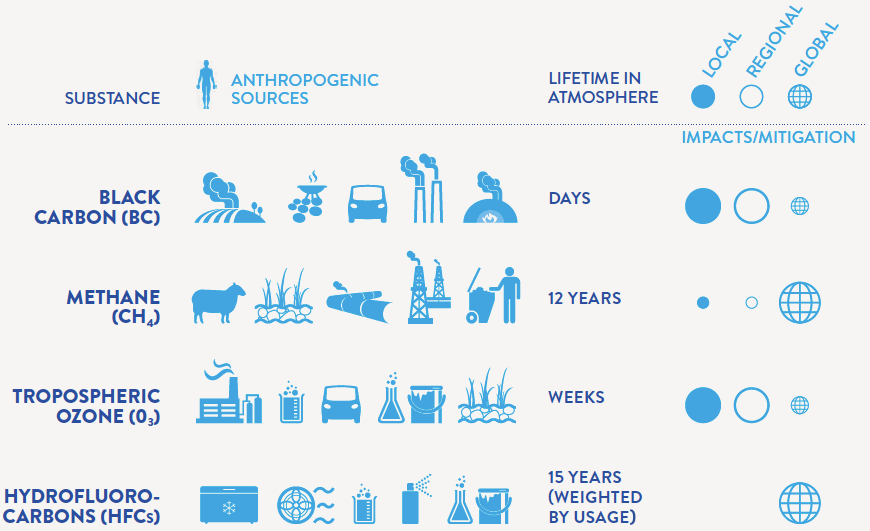 Black carbon has a short atmospheric lifetime, on the order of a few days to weeks, so effects are strongly regional. Black carbon particles give soot its black color and, like any black surface, strongly absorb sunlight. In snow-covered areas, the deposition of black carbon darkens snow and ice, increasing their absorption of sunlight and making them melt more rapidly.

Black carbon may contribute to the acceleration of sea ice loss, and melting of glaciers, which are a major source of fresh water for millions and contribute to sea level rise. Additionally, black carbon, as small particulate matter (PM2.5), contributes to respiratory and cardiovascular illnesses, and other air pollutants are often emitted from the same sources. Reductions in this pollutant would slow climate warming and have significant co-benefits for human health, particularly in developing countries where a large proportion of black carbon comes from household biomass burning.

Black carbon emissions are expected to fall in many parts of the world, but concerted efforts globally could result in significant emissions reductions by 2030. In the case of cooking by burning wood or biomass, the move to cleaner burning fuels would immediately reduce black carbon and would not be too expensive (at least globally). Transitioning from coal plants to renewables or other cleaner energy sources would also reduce black carbon emissions.

Methane emissions are generated primarily by agriculture, including from farming rice and ruminant livestock (methane is produced by bacteria in their stomachs), natural gas and petroleum systems, and waste disposal in landfills. It also has natural sources like wetlands. Methane has an atmospheric lifetime of about 12 years and a global warming potential of about 25 over a 100-year period, meaning a pound of methane has 25 times the warming power of a pound of carbon dioxide over this timespan. It makes up about 10 percent of greenhouse gas emissions in the United States and roughly 16 percent worldwide.

Reductions in methane emissions can also improve local air quality by reducing tropospheric ozone, which methane helps to produce. Emissions of methane are expected to continue increasing through 2030, unless immediate action is taken. At oil and gas wells, methane can be burned to immediately convert the gas to carbon dioxide, reducing its GWP. To reduce the impact from livestock, certain diets are being explored, and reductions in livestock populations would also reduce methane emissions.

Ozone occurs at both the troposphere (ground level) and in the stratosphere. Tropospheric ozone is not an emitted pollutant, but is created from the chemical reactions of methane, carbon monoxide, nitrogen oxides, and volatile organic compounds, known as precursors. Its lifetime in the atmosphere varies from hours to weeks. In order to reduce the warming effect of tropospheric ozone it is necessary to reduce these precursor emissions.

There are four types of fluorinated gases (F-gases), most of which are human-made: hydrofluorocarbons, perfluorocarbons, nitrogen trifluoride, and sulfur hexafluoride. Their use is expected to grow dramatically over time (see figure below). Though the F-gases are all climate forcers, hydrofluorocarbons are the only short-lived species. HFCs are used in air conditioning, refrigeration (in grocery stores and food processing facilities, for example), foam blowing, aerosol propellants, and as solvents. Emissions generally come from faulty equipment, poor maintenance, and leakage from improper disposal.

The global warming potential of HFCs can be thousands of times greater than that of carbon dioxide and they have a significant impact on climate change. This warming impact is projected to grow in the absence of controls on global production.  Given their high emission rates and, on average, their relatively short atmospheric lifetime (compared to carbon dioxide), efforts to reduce hydrofluorocarbon emissions in the near term will significantly reduce projected temperature increases in the coming decades. HFC-143a, the most common hydrofluorocarbon used in refrigeration and air condition systems, leaks into the atmosphere as a result of faulty equipment or improper disposal. To combat this, recycling systems can be set up and alternative gases with lower global warming potential can be mandated in new systems.

Projected Growth in HFCs and Climate Forcing from Emissions

Costs to reduce short-lived climate pollutants can vary depending on the source of the pollutant and the available technologies to reduce those emissions. Typically, costs will be lower for reductions achieved through efficiency improvements or using substitutes that emit fewer climate pollutants—these options may even generate a net savings. For example, achieving energy efficiency in buildings and appliances costs less than reducing the carbon intensity of power plants, where capital-intensive technologies that need to be installed may take more time.

The Climate and Clean Air Coalition (CCAC) is a cooperative public-private initiative that promotes national and international action but establishes no legal obligations or authorities. Formed in 2012, the coalition includes the United Nations Environment Program (UNEP) and other governments around the world, united to address short-lived climate pollutants and to deliver action and benefits on “climate, public health, energy efficiency, and food security.”

The Montreal Protocol is an international treaty aimed at eliminating ozone depleting substances, which are also potent greenhouse gases. The treaty’s net contribution to climate mitigation is about five to six times larger than the Kyoto Protocol’s first commitment period targets.

At the 2016 Meeting of the Parties to the Montreal Protocol in Kigali, Rwanda, countries around the world agreed to a legally binding commitment to reduce HFC emissions that could prevent up to 0.5 degrees Celsius of warming by 2100. This landmark agreement, known as the Kigali Amendment, includes targets and timetables to replace HFCs with cleaner alternatives, provisions that restrict countries who ratified the protocol from trading with countries who have not beginning in 2033, and a commitment by richer countries to finance poorer countries’ transition to the new standards.

Under the Obama Administration, the U.S. EPA issued New Source Performance Standards (NSPS) to address methane emissions from new, modified and reconstructed sources in the oil and gas industry. It set emission limits for methane, covered additional sources located at oil wells and processing plants than the previous 2012 NSPS rule, and required owners and operators to check and repair leaks. In August, 2020, the EPA rescinded portions of the standards relating to transmission and storage of fossil fuels, and removed methane-specific requirements, arguing that they are covered by the volatile organic compound standard.

The EPA has established several voluntary programs aimed at reducing high-GWP emissions. In September 2014, the Obama administration announced a series of voluntary commitments from chemical firms, manufacturers and retailers, and the federal government to move rapidly away from HFC-134a and similar compounds and to shift to more environmentally friendly replacements.

The EPA also maintains a regulatory program called the Significant New Alternatives Policy Program (SNAP). Under this program, the EPA may evaluate and control substitutes to ozone depleting substances to ensure that they are more environmentally benign than the substances they seek to replace. In August 2014, under the SNAP Program, EPA proposed to limit the use of certain HFCs in mobile air conditioning, certain types of foams, and aerosol applications. In August 2017, the U.S. Court of Appeals for the District of Columbia Circuit ruled EPA lacked the authority to require manufacturers of HFCs to replace HFCs based on climate change, though those who had not made the switch yet to non-ozone depleting substances could be required to switch to those that have lower climate warming potential. In 2018, the EPA under the Trump administration threw out the modified rule, but in April 2020, the D.C. Court upheld the rule.

In December 2020, as a part of end-of-year legislation, Congress passed a bill that will phase down HFCs by 85% by 2036, an idea supported by both environmental and industry groups. The bill, initially introduced as the American Innovation and Manufacturing Act, will also preempt states from issuing more stringent HFC regulations for five years, or for 10 years if a replacement does not emerge. It effectively aligns the U.S. with the Kigali Amendment, which was ratified by the U.S. Senate on Sept. 21, 2022.

Many states have greenhouse gas emissions targets, and some of these include short-lived climate pollutants. A 2016, California law established the most stringent state restrictions on short-lived climate pollutants. It set goals to cut methane and hydrofluorocarbon gases by 40 percent and black carbon by 50 percent below 2013 levels by 2030. Likewise, in November 2020, Maryland finalized regulations to phase out the use of HFCs and reduce methane emissions in order to meet their state target of greenhouse gas emissions reductions of 40% below 2006 levels by 2030.

In addition, as of August 2019, California, Colorado, Wyoming, Ohio, New Mexico, and Pennsylvania have adopted or in the process of adopting regulations to control methane from oil and gas operations.

A critical opportunity to build on the Paris Agreement