Across the globe, hot days are getting hotter and more frequent, while we’re experiencing fewer cold days. Over the past decade, daily record high temperatures have occurred twice as often as record lows across the continental United States, up from a near 1:1 ratio in the 1950s. Heat waves are becoming more common, and intense heat waves are more frequent in the U.S. West, although in some parts of the country the 1930s still holds the record for number of heat waves (primarily related to the Dust Bowl, which was exacerbated by the conversion of prairie to farmland). 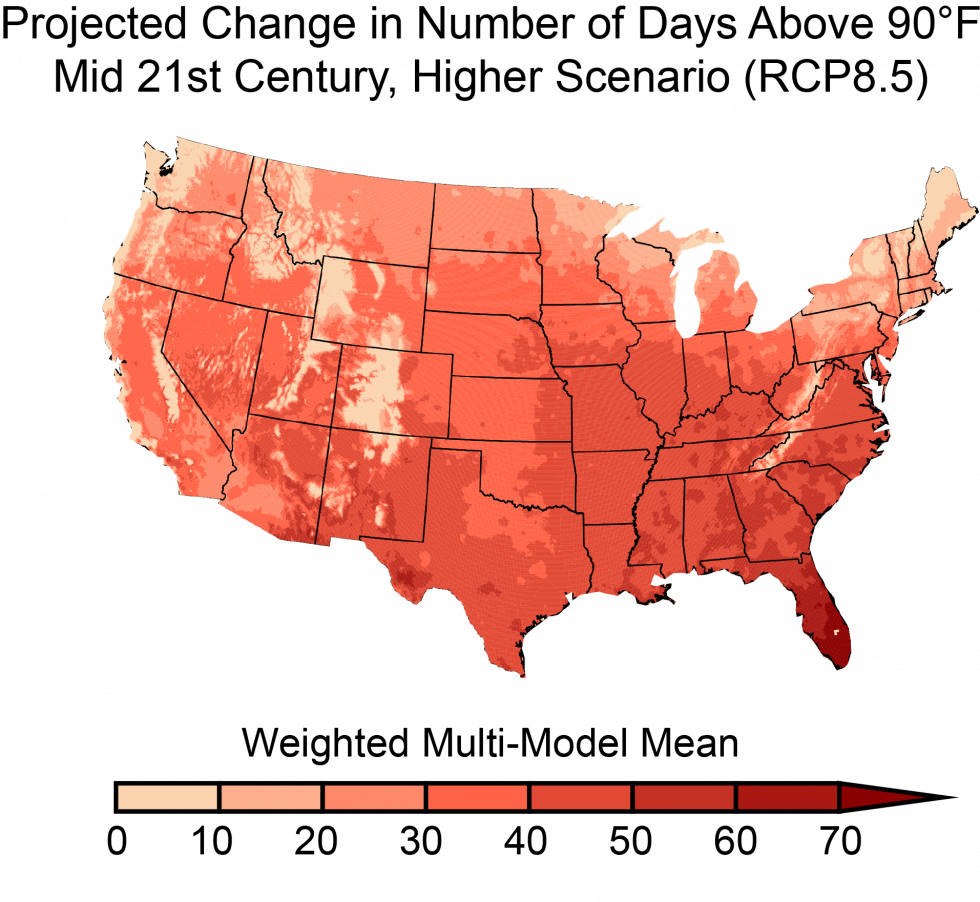 Projected changes in the number of days per year with a maximum temperature above 90°F and a minimum temperature below 32°F in the contiguous United States. Changes are the difference between the average for mid-century (2036–2065) and the average for near-present (1976–2005) under the higher scenario (RCP8.5). This map depicts a weighted multi-modal mean of 32 climate model projections.

Extreme heat can increase the risk of other types of disasters. Heat can exacerbate drought, and hot, dry conditions can in turn create wildfire conditions. Buildings, roads, and infrastructure absorb heat, leading to temperatures that can be 1 to 7 degrees F hotter in urban areas than outlying areas – a phenomenon known as the urban heat island effect. This impact is most intense during the day, but the slow release of heat from the infrastructure (or an atmospheric heat island) overnight can keep cities much hotter than surrounding areas. Rising temperatures across the country pose a threat to people, ecosystems, and the economy.

Extreme heat is one of the leading causes of weather-related deaths in the United States, killing an average of more than 600 people per year from 1999-2009, more than all other impacts (except hurricanes) combined. The Billion Dollar Weather Disasters database compiled by the National Oceanic and Atmospheric Administration lists heat waves as six of the top 10 deadliest U.S. disasters since 1980.

Heat stress occurs in humans when the body is unable to cool itself effectively. Normally, the body can cool itself through sweating, but when humidity is high, sweat will not evaporate as quickly, potentially leading to heat stroke. High humidity and elevated nighttime temperatures are likely key ingredients in causing heat-related illness and mortality. When there’s no break from the heat at night, it can cause discomfort and lead to health problems, especially for those who lack access to cooling, which are often people who have low incomes. Other groups that are particularly vulnerable to heat stress include older adults, infants and children, people with chronic health conditions, and outdoor workers.

Hot days are also associated with increases in heat-related illnesses, including cardiovascular and respiratory complications and kidney disease.

In extreme temperatures, air quality is also affected. Hot and sunny days can increase the production of ground-level ozone, a harmful pollutant that is the main component of smog, which can damage the respiratory system and is particularly harmful for those with asthma. In addition, greater use of air conditioning requires more electricity which, depending on the electricity source, emits other types of pollution, including particulates that have an impact on air quality too. These increases in ozone and particulate matter can pose serious risks to people, particularly the same vulnerable groups directly impacted by heat mentioned above.

Heat waves can exacerbate droughts and wildfires, which can lead to negative impacts on the agriculture sector. For example, the 2021 drought in the West caused North Dakota cattle ranchers to sell their stock due to a lack of feed for the winter. Wildfires in California have burned agricultural land and are raising the cost of insurance for farms and wineries.

Warmer temperatures affect many aspects of the U.S. energy system, including production, transmission, and demand. While higher summer temperatures increase electricity demand for cooling, at the same time, they can lower the ability of transmission lines to carry power, possibly leading to electricity reliability issues like rolling blackouts during heat waves. Although warmer winters will reduce the need for heating, modeling suggests that total U.S. energy use will increase in a warmer future. In addition, as rivers and lakes warm, their capacity for absorbing waste heat from power plants declines. This can reduce the thermal efficiency of power production, which makes it difficult for power plants to comply with environmental regulations regarding the temperature of their cooling water, and could lead to plant shut-downs.

How to Build Resilience to Extreme Heat

Strategies to build resilience to extreme heat are laid out in our publication, “Resilience Strategies for Extreme Heat.” Some strategies include: