Climate change is worsening hurricane impacts in the United States by increasing the intensity and decreasing the speed at which they travel. Scientists are currently uncertain whether there will be a change in the number of hurricanes, but they are certain that the intensity and severity of hurricanes will continue to increase. These trends are resulting in hurricanes being far more costly in terms of both physical damages and deaths. To avoid the worst impacts moving forward, communities in both coastal and inland areas need to become more resilient.

Hurricanes are subject to a number of climate change-related influences:

Warmer sea surface temperatures intensify tropical storm wind speeds, giving them the potential to deliver more damage if they make landfall. Over the 39-year period from 1979-2017, the number of major hurricanes has increased while the number of smaller hurricanes has decreased. Based on modeling, the National Oceanic and Atmospheric Administration predicts an increase in Category 4 and 5 hurricanes, alongside increased hurricane wind speeds. Warmer sea temperatures also cause wetter hurricanes, with 10-15 percent more precipitation from storms projected. Recent storms such as Hurricane Harvey in 2017 (which dropped more than 60 inches in some locations), Florence in 2018 (with over 35 inches) and Imelda in 2019 (44 inches) demonstrate the devastating floods that can be triggered by these high-rain hurricanes.

Sea level rise is already making coastal storms more damaging and is expected to continue worsening. Globally, average sea level has risen over half a foot since 1900 and is expected to rise 1 to 2.5 feet during this century. Coastal regions will experience the worst of these effects. Sea level rise increases the risk of coastal flooding and has intensified the impact of several recent storms. A study of Hurricane Katrina estimated that higher sea levels led to flood elevations 15-60 percent higher than climate conditions in 1900. A study of Hurricane Sandy estimated that sea levels at the time increased the likely of flooding by three times and that additional rising will make severe flooding four times more likely in the future.

Changes in the atmosphere, like the warming of the Arctic, may be contributing to other trends seen in the hurricane record. Hurricanes today travel more slowly than they previously did. Though the mechanism that is causing this slowdown is still debated, it is clear that storms are “stalling” and subjecting coastal regions to higher total rainfall and longer periods of high winds and storm surge. This has increased the destruction caused by recent storms in the United States.

The warming of mid-latitudes may be changing the pattern of tropical storms, leading to more storms occurring at higher latitudes. A northward shift in the location at which storms reach their peak intensity has been observed in the Pacific, but not in the North Atlantic, where hurricanes that make landfall in the Gulf and East Coast are created. This shift could put much more lives and property at risk, however more research is required to better understand how hurricane tracks might change.

Definition of a Hurricane

Hurricanes and tropical storms are types of tropical cyclones. These are rapidly rotating, low-pressure systems with activity like thunder and lightning that develop in the tropics or subtropics. Stronger systems are called “hurricanes” in the Atlantic Ocean and northeastern Pacific Ocean or “typhoons” in the northwestern Pacific. Weaker tropical cyclones are called “tropical depressions” or “tropical storms.”

The National Hurricane Center categorizes hurricanes based on wind speed. A storm with winds exceeding 74 mph is a Category 1 hurricane. Storms with winds stronger than 111 mph are considered “major hurricanes” (Category 3 or higher). Wind speed is just one of many factors that contribute to a hurricane’s impact. Other factors include its track (the site where the storm makes landfall), size, storm structure, rainfall amount, duration, and the vulnerability of the area it affects.

The frequency and intensity of tropical cyclones vary from basin to basin. In the North Atlantic Basin, the long-term (1966-2009) average number of tropical storms is around 11 annually, with roughly six storms becoming hurricanes. 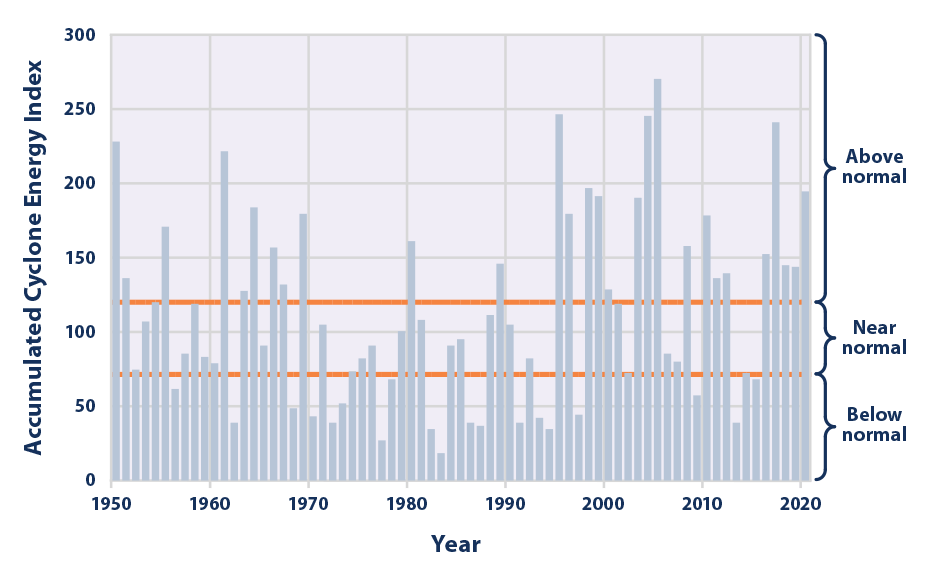 Climate change is adding to the cost and threat of hurricanes. While there have been extreme storms in the past, recent history reflects the growing financial risk of hurricanes. Four of the ten costliest hurricanes on record in the United States occurred in 2017 and 2018 and Hurricane Katrina (2005) remains the most expensive hurricane on record, costing over $186 billion (2022 dollars).

It is important to note that while stronger hurricanes are causing more damages, increased development in coastal  areas is leading to a growing amount of property risk. There are nearly 50 million homes and at least $1.4 trillion in assets within an eighth of a mile of the coast. U.S. coastal populations grew by roughly 35 million people between 1970 and 2010. As more development occurs in harm’s way, the greater the risk of damage will grow.

Stronger hurricanes also pose a significant risk to public health and human lives. Hurricane Katrina caused over 1,800 deaths, and in 2017 Hurricane Maria caused nearly 3,000 deaths in Puerto Rico. Hurricane Fiona in 2022 triggered an island-wide power outage. Disruptions to water supplies and power systems can create risk for waterborne illness, environmental contaminants, mosquito borne illnesses, and can result in hospital closures which impacts the ability for patients to receive care. These risks are especially pressing in marginalized communities that have fewer resources with which to prepare for and recover from hurricanes.

Making immediate reductions in greenhouse gas emissions, with the aim of halting global warming, is essential to reduce the risk of the strongest storms in the future. Communities can bolster their resilience to the impacts of hurricanes by: