The Quest to Decarbonize the U.S. Economy

Vice President for Policy and Outreach, Center for Climate and Energy Solutions

The energy being generated in Washington D.C. toward action on climate change is as great as it’s been in nearly a decade. Proposals for carbon pricing and a “New Manhattan Project” have been gaining traction in conservative circles, and the “Green New Deal” has galvanized progressives in a way that no one could have predicted even a year ago. With the latest science on potential climate impacts more sobering than ever, public concern is also rising.

The question is—how do we translate that energy into the kind of meaningful and sustained action that’s needed to address the climate crisis?

Last year, the Center for Climate and Energy Solutions (C2ES) launched a project called Climate Innovation 2050, which has been grappling with these questions. To better understand key challenges and potential solutions, we’ve brought together more than two dozen leading companies to collectively examine pathways for substantially decarbonizing the U.S. economy by mid-century.

The ultimate goal of Climate Innovation 2050 is a comprehensive long-term strategy for the entire U.S. economy. As an initial step, C2ES partnered with the Rand Corporation and the Joint Global Change Research Institute, to work with the companies to develop a set of scenarios that would outline distinct pathways to decarbonization. Drawing from a foundation of previous analyses that have focused on developing technology driven scenarios—scenarios where a particular technology or combination of technologies dominates decarbonization efforts—we took a different approach to constructing the Climate Innovation 2050 scenarios.

In addition to technology, our scenarios focused on the social, economic and political drivers needed to decarbonize the economy. To better understand how these factors relate to each other, we focused on the actors with influence over potential decarbonization pathways; federal, state and local governments as well as companies and consumers. This approach produced a number of insights about the types of policies that can be impactful across a range of potential futures, including those that can drive the development and deployment of key technologies. 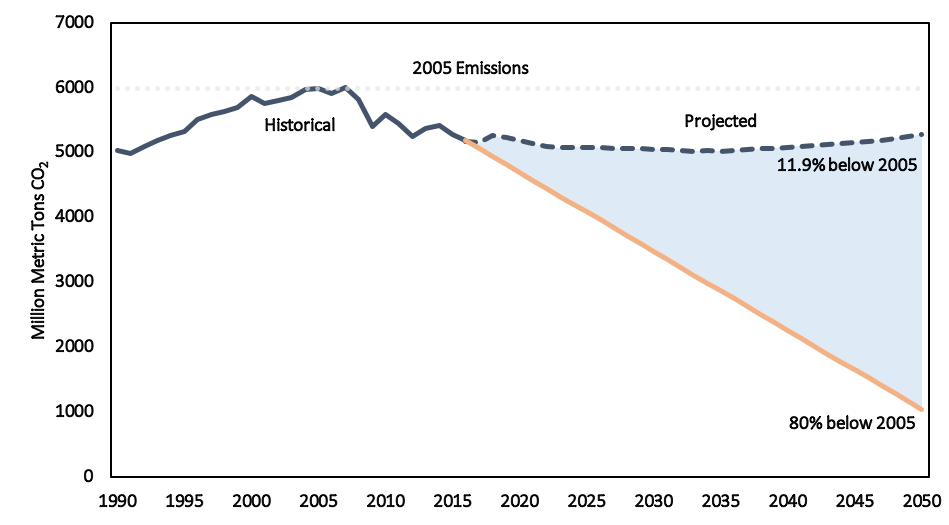 Reinforcing previous analyses, the Climate Innovation 2050 scenarios underscore the fundamental shifts necessary to decarbonize the U.S. economy: decarbonizing the world’s power supply; switching to electricity and other low-carbon fuels in the transportation, industry, and buildings sectors; increasing energy efficiency in each of these sectors; increasing carbon sequestration; and reducing non-carbon climate pollutants such as methane.

By focusing on the social, economic and political drivers of decarbonization, we were also able to discern several additional takeaways. For instance, we found that technological innovation can greatly facilitate decarbonization, but is not, on its own, sufficient to achieve it. That is, declines in the cost of low-carbon technologies—in the absence of “pull” policies that can accelerate deployment—will not, by themselves, enable levels of technology diffusion sufficient to meet decarbonization goals. Integrating input from participating companies helped us to account for the ways in which the engagement of a specific actor might affect the types of technologies likely to thrive in a decarbonized economy. For example, technologies with large capital costs and high technical risk in heavily regulated industries, such as nuclear energy, are much more likely to thrive in a future where the federal government is playing an active role in climate policy. Building codes are implemented at the state level, making state policy critical to decarbonization efforts in that sector. Deployment of distributed technologies like rooftop solar photovoltaics can be driven by policies like Property Assessed Clean Energy or PACE programs, which help finance projects through local property tax assessments. If we need an array of different technologies to address climate change – and we do – we need an equally diverse set of actors to help accelerate the deployment of those technologies.

We also found that interdependence among sectors would have a profound impact on the success or failure of decarbonization efforts. The clearest example of this is in the transportation sector, where a concerted push towards electric vehicles has gained considerable traction, even on Capitol Hill. Yet without decarbonizing the electricity that powers those vehicles, the emissions reduction benefit of switching to electric vehicles would be significantly less than what’s necessary. Electrification also factors heavily in the buildings sector, where home heating oil and natural gas play critical roles, but also contribute significant emissions. Specific technologies, such as carbon capture, utilization and sequestration, also have significant potential applications across multiple sectors

Of course, any meaningful and durable long-term climate action is going to have to be built on a foundation of more immediate steps. That’s why we released a set of near-term federal actions to address climate change in late February. C2ES President Bob Perciasepe, along with Senator Tom Carper (D-DE), Congressman Francis Rooney (R-FL), and representatives from DTE Energy, Entergy, Equinor, Intel, Lafarge Holcim, and Mars, Inc., outlined a diverse set of possibilities for near-term, bipartisan action.

It may not be obvious in the current political environment, but there exists a broad set of actionable climate policies that could make progress in the 116th Congress. In our brief, we outlined near-term options focused on several key opportunity areas, including; technology innovation, infrastructure, advanced energy and transportation solutions, carbon capture and biological sequestration, energy efficiency and addressing short-lived climate pollutants. We also urged Congress to continue working on a comprehensive, market-based mechanism that could take a variety of forms, including a carbon tax, cap and trade or even an economy-wide clean energy standard.

These solutions were identified because they addressed critical opportunities, but also because they have the potential to generate the bipartisan consensus needed to get them across the President’s desk in the near-term. We’ve been pleased that a number of congressional committees and offices – both Democratic and Republican – have expressed a genuine interest in making progress on climate solutions. Of course, one of the reasons these ideas have generated bipartisan interest is because they tend to have important economic and public health benefits. Then again, that’s the whole point. When focused on capturing these types of co-benefits, actions to address climate change can represent enormous opportunities for everyone involved. That’s an important requisite for generating the level of political ambition necessary for long-term, comprehensive action.

Climate Innovation 2050 is also working to develop the kind of comprehensive, adaptable longer-term plan that can address the myriad decarbonization challenges across the U.S. economy and serve as a guide for policy development. We’ve again enlisted the aid of a growing cadre of companies to help identify cross-cutting and key sector specific barriers to decarbonization, as well as the ambitious mix of technologies, policy levers and corporate investments needed to drive those technologies into the marketplace. As a follow-on to the Climate Innovation 2050 scenarios, we plan to release a strategic framework later this year to inform the burgeoning discussion about what long-term solutions to climate change should look like and help steer it toward meaningful – and actionable – solutions.

As public concern about climate change rises, pressure to act will increase substantially. That pressure will, and should, affect public and private institutions alike. Yet there’s no guarantee that the actions that result will make a material, let alone sufficient difference. That’s why C2ES – through the Climate Innovation 2050 initiative – is working with policymakers and the business community to understand how we’ll need to work together to ensure we translate growing interest in climate action into meaningful solutions.

Vice President for Policy and Outreach, Center for Climate and Energy Solutions