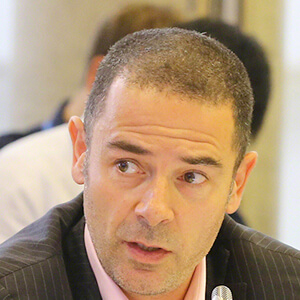 Kaveh Guilanpour is the Vice President for International Strategies at the Center for Climate and Energy Solutions, overseeing the international aspects of the work of C2ES including in relation to the United Nations negotiations process.

Mr. Guilanpour has worked in the environmental sector in policy and legal roles for more than two decades, with almost 15 years of experience on international climate change issues related to the UNFCCC. During that time he has held various positions, including: legal advisor on the United Kingdom and European Union’s international climate negotiating teams; the United Kingdom’s head of UNFCCC negotiations; co-lead negotiator on climate change for the European Union; co-lead negotiator on climate change for the Alliance of Small Island States; head of the Secretariat of the High Ambition Coalition; and Principal Advisor on Climate Change to the Republic of the Marshall Islands.

Mr. Guilanpour has a First Class Honors Degree in biochemistry and a Masters in environmental technology, both from Imperial College, London. He is also a qualified lawyer, and practiced international environmental law at Freshfields Bruckhaus Deringer.

Climate finance refers to the local, national, or transnational financing that supports mitigation and adaptation actions to address climate change. It can be drawn from public, private, and alternative sources of financing. In accordance with the principles of the UN …

Transparency of Action: Issues for COP 26