This is one in a series of briefs prepared as part of C2ES’s Climate Innovation 2050 initiative, which brings together leading companies to examine potential pathways toward substantially decarbonizing the U.S. economy. Other briefs focus on Agriculture & Forestry, Buildings, Manufacturing, Oil & Gas, and Transportation. (Note: Full citations to supporting materials can be found in the pdf version of this brief.)

This brief provides an overview of emissions trends and projections, and of decarbonization challenges and opportunities, in the U.S. power sector. Key points include:

The U.S. power sector converts primary energy into electricity that is used throughout the economy. In 2016, the five largest sources for electricity generation were natural gas (34 percent), coal (30 percent), nuclear (20 percent), hydro (7 percent), and wind (6 percent).

The vast majority of electricity is generated at large, central sites and transported to end users via the network of transmission and distribution lines known as the electricity grid. In some cases, such as most renewable primary energy sources (e.g., hydro, geothermal, wind), generating stations are placed at the site of the resource and cannot be relocated. Natural gas, coal, and nuclear generating stations are often sited in remote areas with fuel supply networks like river or rail.

Historically, system operation required only that the output of large central power plants be ramped up or down to respond to levels of demand. This has been changing in recent years with the increased use of energy sources like wind and solar that cannot predictably ramp up or down. The growing use of distributed energy owned by end users, not power companies, is another recent trend that is adding complexity to electricity system operation.

Carbon dioxide (CO2), which is emitted when fossil fuels are combusted to generate electricity, accounts for more than 98 percent of the sector’s greenhouse gas emissions. Other emissions include nitrous oxide (N2O), which is emitted by certain types of coal-fired power plants, and sulfur hexafluoride (SF6), which is used in electricity transmission and distribution systems.

Emissions from electricity generation rose steadily from 1990 to 2000 as total sector output grew, relying primarily on coal and nuclear. The increased use of natural gas starting in 2000 allowed total sector output to grow while emissions remained essentially flat. Despite rising economic activity since 2008, energy efficiency has held total electricity consumption steady while the increasing substitution of natural gas and renewables for coal has reduced emissions. The sector’s greenhouse gas emissions fell 20.5 percent from 2005 to 2015. In carbon intensity terms (tons emitted per unit of electricity), the sector has been decarbonizing at an average rate of 3 percent a year since 2008. The trend toward decarbonization has been somewhat moderated, however, by the early retirement of nuclear plants, which are being replaced by natural gas generation. 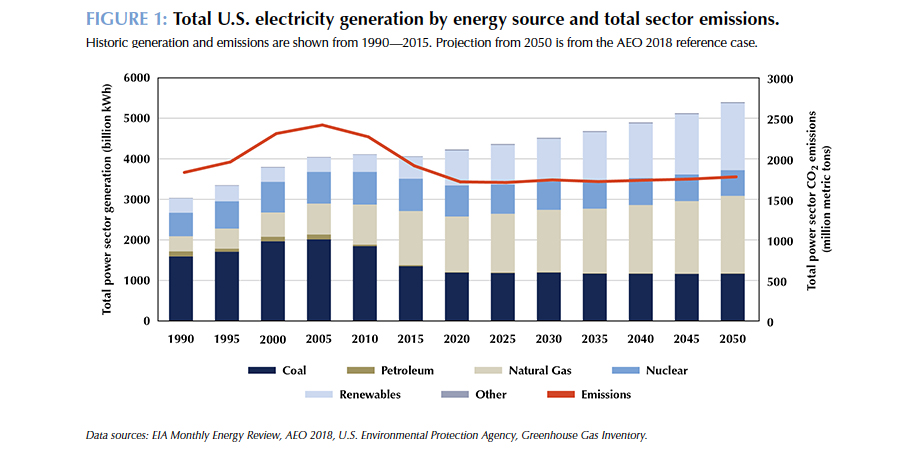 Looking ahead to 2050, electricity use is expected to grow steadily as the economy expands and as some new electricity-using technologies, like electric vehicles, become more common. Greenhouse gas emissions, in contrast, are projected to continue declining in the 2020s, then rise to approximately the same levels as today by 2030 and remain relatively flat through 2050. The 2018 edition of the U.S. Energy Information Administration’s (EIA’s) Annual Energy Outlook (AEO) projects in its reference case that total generation will grow 31.6 percent by 2050 because of economic growth. Most of the increased generation in the reference case will come from natural gas, which rises to 35 percent of total electricity generation, and from renewables, which grow to 31 percent of generation. Most of the growth in renewables comes from new wind and solar capacity; hydro, geothermal, and other renewables sources are expected to remain relatively flat. Coal accounts for 22 percent of total generation in 2050, only a small decline in absolute terms.

The substantial decarbonization of the U.S. economy likely entails greater demand for electricity than projected in the EIA’s reference case and, at the same time, very substantial reductions in the power sector’s emissions. It is widely held that it is easier to decarbonize the power sector than other sectors as it has fewer point sources and a variety of non-emitting substitutes are available and relatively cost-competitive. Decarbonizing the power sector will likely entail a combination of: continued improvements in end-use efficiency; continued substitution of no- or lower-emission power sources; improved grid flexibility and storage; and the use of carbon capture on remaining fossil fuel-based generation.

Efficiency opportunities are widespread across the economy, ranging from newer lighting and appliance technologies to improved building envelopes to reduce space conditioning energy needs. (See further discussion of efficiency opportunities and challenges in companion backgrounders on buildings, industry and transportation.) Even land-use policies, like promoting tree planting and cool roofs to reduce urban heat islands, can help reduce electricity demand. The extent to which efficiency opportunities are realized—and the extent to which other sectors electrify—will strongly influence electricity demand in a decarbonized economy.

Substitution of non-fossil energy sources for fossil fuels is one key to decarbonizing electricity. Of the available non-fossil sources, conventional nuclear and hydro are the most mature, in terms of technology development. As hydroelectricity can only be generated in specific locations (and essentially all suitable sites in the United States have been developed), its potential for expansion is limited. While economic pressures are forcing the early retirement of some existing nuclear plants, advanced designs now under development could allow greater nuclear generation in the future. In both nuclear and hydro, technology research is currently focused on smaller-scale applications with potential safety, cost, and environmental benefits over conventional, larger technologies.

As noted, wind and solar are projected to grow substantially in business-as-usual projections. While some estimates see nearly unlimited potential for these sources in the United States, significantly broader deployment faces key hurdles. First, the biggest wind and solar resources are not universally spread, but rather exist in isolated pockets in the Midwest (for wind) and Southwest (for solar), requiring significant expansion of the electricity grid to move power to areas of high demand. Solar rooftop PV can be deployed almost anywhere because of its small size, but its production efficiency (“capacity factor”) can be quite low in some regions, especially during winter months. A second major hurdle facing the current generation of wind and solar technologies is the intermittency of these resources. Because a grid operator cannot direct the wind to blow or the sun to shine (these resources are not “dispatchable”), and electricity must be generated in real time to meet demand, other resources will be needed. Advanced wind and solar technologies currently under development could also greatly increase their respective potential.

Greater reliance on more distributed and more variable low-carbon power sources would be facilitated by a larger, more flexible power grid with enhanced storage capacity. Recent and emerging technological advances in smart grid applications will need to be fully deployed to maintain reliable operation of the grid as more intermittent energy sources are developed.

Some energy is now stored through pumped hydroelectric storage—during times of supply excess electricity is used to pump water uphill to reservoirs where it can be released later to run electricity generating turbines. But since such opportunities are location-specific, other options will be needed to match wind and solar deployment. Wider deployment of batteries, flywheels, and other systems could help manage daily fluctuations in energy supply. But other technological advances may be needed to overcome seasonal intermittency—the fact that, for example, solar resources are low for half the year in northern regions. Future technological advances could address seasonal intermittency by using surplus electricity to generate hydrogen, liquid fuels, or other energy carriers that could be used generate electricity in off seasons or as fossil fuel substitutes in other sectors (e.g., zero-carbon transportation fuels). Another potential solution to intermittency is to use connected devices (intelligent efficiency) to make electricity demand more flexible. As energy end uses such as transportation and buildings are electrified and connected to smart networks, the potential for this supply-demand matching grows.

Given the assumption rapid growth in electricity demand is needed for economy-wide deep decarbonization, simply replacing existing fossil fuel sources with non-emitting energy sources for electricity generation will not be sufficient. There must be a growth in electricity supply, which likely means using some existing power plants and associated transmission infrastructure. Most U.S. decarbonization scenarios anticipate the deployment of CCUS technologies to capture the CO2 released after combustion of fossil fuel and keep it from being emitted into the atmosphere. After the CO2 is captured, it can be used in an industrial process, which either displaces the use of other fossil-derived CO2 or sequesters it, for example in a plastic. Captured CO2 can also be stored underground. CCUS can be incorporated into the original design of a facility, as is being done in a few demonstration projects worldwide, or existing fossil fuel-fired power plants can be retrofitted, as was recently completed on the Petra Nova coal-fired power plant in Texas.