This is one in a series of briefs prepared as part of C2ES’s Climate Innovation 2050 initiative, which brings together leading companies to examine potential pathways toward substantially decarbonizing the U.S. economy. Other briefs focus on Agriculture & Forestry, Manufacturing, Oil & Gas, Power Generation, and Transportation. (Note: Full citations to supporting materials can be found in the pdf version of this brief.)

This brief provides an overview of emissions trends and projections, and of decarbonization challenges and opportunities, in the U.S. buildings sector.

Residential and commercial buildings use large quantities of energy for heating, cooling, lighting, and other needs. In 2012–2013, the median ages of a U.S. home and commercial building were 37 years and 32 years, respectively. Slow turnover means that by mid-century much of the existing U.S. building stock will be 70 years old. Population and economic growth will also drive substantial increases in the total building stock. Substantially decarbonizing the building sector requires steps in the near term to reduce the energy demand and carbon intensity of both existing buildings and new construction.

Efficiency standards for equipment and appliances and stronger building codes have helped to significantly improve energy efficiency in the buildings sector. According to data from the U.S. Energy Information Administration, from 2007 to 2017, energy intensity decreased 19 percent in residential buildings (million Btu per household) and 15 percent in commercial buildings (thousand Btu per square foot basis)[i.

The growth of smart meters and other “intelligent components” enabling a more systems-oriented efficiency approach. Increased connectivity between devices and the electric power grid—which produces the majority of building sector emissions—allows users to tailor their demand and even utilize devices for energy storage, both of which could help to reduce emissions.

Despite projected growth in population, square footage, and energy use, continued efficiency improvements are projected to largely avoid emissions growth in the commercial sector and drive modest emissions reductions in the residential sector, through 2050. Increased demand for cooling in a warmer climate is also likely to be a key determinant of the building sector’s future emissions profile.

From 1990 to 2015, carbon dioxide (CO2) emissions from fossil-fuel combustion attributed to commercial buildings and residential buildings increased 7.8 percent and 20.4 percent, respectively. Emissions have been relatively flat since 2010. The majority of these emissions are indirect emissions from electricity generated off-site to power buildings. The remainder are direct emissions, primarily from on-site combustion fossil fuels for heating, hot water, and cooking, and from leaks of compounds used in refrigeration and air conditioning.

In 2015, CO2 emissions from fossil-fuel combustion in the U.S. building sector generated 565.8 million metric tons of carbon dioxide equivalent (MMtCO2e) in direct emissions, or about 8.6 percent of total U.S. greenhouse gas emissions, making buildings the fourth highest emitting sector (after electric power, transportation, and industry). When indirect CO2 emissions from the use of electricity generated off-site are factored in, residential and commercial buildings generated 1,913.3 MMtCO2e, or 29 percent of total U.S. emissions. 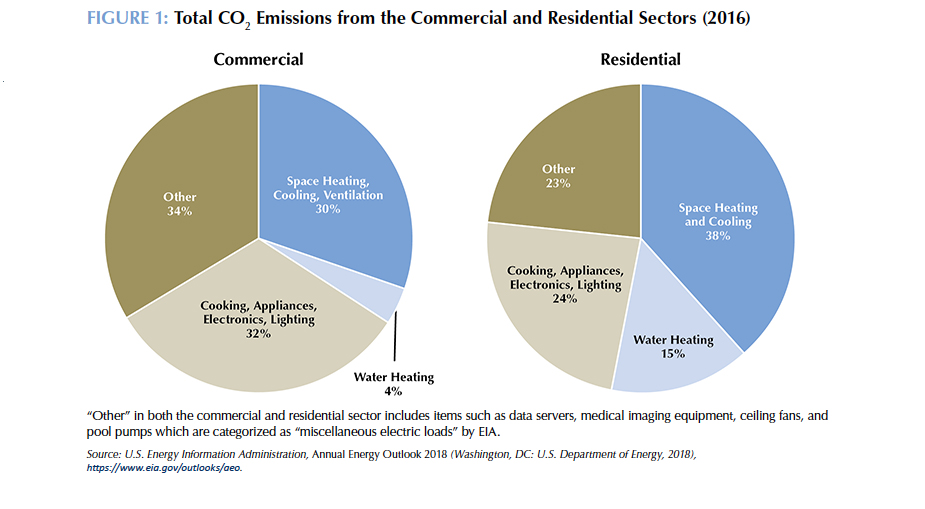 In 2015, CO2 emissions from fossil-fuel combustion in the U.S. building sector generated 565.8 million metric tons of carbon dioxide equivalent (MMtCO2e) in direct emissions, or about 8.6 percent of total U.S. greenhouse gas emissions, making buildings the fourth highest emitting sector (after electric power, transportation, and industry). When indirect CO2 emissions from the use of electricity generated off-site are factored in, residential and commercial buildings generated 1,913.3 MMtCO2e, or 29 percent of total U.S. emissions.

The largest increases have been in indirect emissions, driven largely by population growth, which increases demand for housing and commercial space, the use of electronic devices, and energy consumption.

Looking ahead, residential and commercial energy use is projected to increase around 0.3 percent a year from 2016 to 2050. Despite that growth in energy use, total direct and indirect energy-related CO2 emissions from the residential sector are expected to decrease by 12.3 percent from 2016 to 2050, while total emissions for the commercial sector are expected to increase by 0.9 percent. These projections reflect a projected 22.8 percent growth in population, an increase in the number of households, and increased air conditioner use driven by migration to warmer regions of the country, offset by increases in energy efficiency and distributed generation. 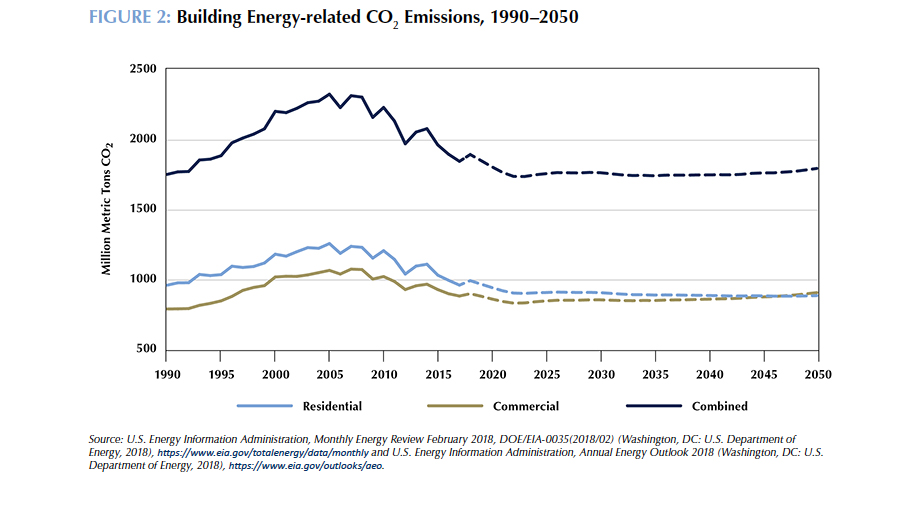 Residential buildings use energy for cooling, heating, lighting, refrigeration, clothes and dish washing, cooking, water heating, and appliances. Over the last 49 years, rising population has led to the addition of a net average of 1.4 million completed homes a year, with total stock at 70.3 million as of 2017..

From 1990 to 2015, CO2 emissions from fossil-fuel combustion from the residential sector increased 7.8 percent, reflecting a 5.5 percent decrease in direct, and a 15.4 percent increase in indirect, emissions. In 2015, more than 85 percent of the sector’s direct emissions were from on-site fossil-fuel combustion. Most of the remainder resulted from leaks of hydrofluorocarbons, or HFCs, which are commonly used as refrigerants and are extremely potent greenhouse gasses. Rising indirect emissions result from increased population, housing stock, and communications technologies in homes.

Even with population projected to grow 22.8 percent by 2050, residential energy consumption is expected to remain largely flat, as energy efficiency and improved building codes reduce energy usage per square foot.

Commercial buildings use energy for ventilation, lighting, refrigeration, cooking, cooling, water heating, computer and office equipment, and heating. From 1979 to 2012, the number of commercial buildings rose by 40 percent, and the amount of floor space increased by 70 percent.

Major opportunities to decarbonize the buildings sector include the substitution of electricity for direct fossil-fuel combustion and improved energy efficiency, including through wider deployment of “intelligent efficiency” technologies. Major challenges include upfront costs and long payback periods and “split incentives” among builders, owners, and occupants.

Electrification of end uses will be a key pathway to reducing emissions. Assuming a decarbonized power sector, using electricity for heating, cooling, and hot water needs, instead of burning natural gas or fuel oil, can greatly reduce a building’s emissions. In a study by the city and county of San Francisco of ways to reduce emissions 80 percent by 2050, researchers found widespread adoption of electric heat pumps to be the “single most important lever considered.” Heat pumps are currently the most efficient available technology for space heating in the commercial and residential sectors. Although heat pumps have high initial capital costs, high efficiency and minimal maintenance make air source heat pumps a positive financial investment over 20 years. Existing renewable thermal technologies such as geothermal heat pumps or solar water heaters can be installed as fossil fuel-powered replacements. Additional research and development is needed to improve how heat pumps operate in colder temperatures and to reduce costs and optimize the performance of all alternative technologies.

Buildings undergo several phases over their lifetime, including design, construction, operation, and retrofits. In each stage, there are opportunities to improve energy efficiency and reduce emissions: designing a building to use more natural lighting or install district heating, sourcing construction materials that have less embodied carbon, changing consumer behavior and electricity usage patterns to reduce energy demand, or planning major retrofits over the life of the building. Areas where technical advances can increase energy efficiency include improving building envelopes and window insulation to control for air and moisture and optimizing the cost and performance of LED lighting. Additional qualitative challenges include building occupants’ lack of awareness and information about energy use.

Many tenants in commercial and residential buildings currently lack real-time insight on energy use. In commercial and residential settings, energy costs may be monitored by only a few people or embedded in rental charges, thus reducing transparency and any incentive to reduce energy use. While nearly half of all U.S. electricity customers now have smart meters, there is still resistance to smart metering due to concerns over cost, privacy and accuracy.[xiv] Many companies now offer hardware, software, and services to help commercial and residential users benchmark their energy usage against peers to make better-informed decisions. These intelligent efficiency solutions can help ensure energy is consumed where it is precisely demanded, enable demand response during peak loads on the grid, and drastically alter how tenants actively interact with the buildings they occupy.

As a building undergoes different phases over its lifetime, the people who construct, own, and occupy it will vary. For example, the builder or owner of a newly constructed building may not install the most energy efficient appliances or equipment, whereas the buyer or renter will be responsible for paying the energy bill. This split incentive tends to favor lower upfront costs despite the net lifetime savings that could be achieved through greater energy efficiency.

Alliance to Save Energy, 2016, “The Evolution of EIA’s Residential, Commercial, Industrial, And Transportation Forecasts,” https://www.ase.org/blog/evolution-eias-residential-commercial-industrial-and-transportation-forecasts.