Electric energy storage technology can make it easier to deploy renewables on a large scale by providing electricity when renewables can’t. Wind power produces electricity only when the wind is blowing, and solar power only when the sun is shining, making it harder to match electricity supply with demand. Traditional baseload (e.g., coal and nuclear) and other dispatchable (e.g., natural gas) generation can be scheduled to produce power in specific amounts at specific times.

Storage technology, however, can take electricity produced by renewables at off-peak demand times and feed it onto the grid during peak demand periods. Using stored electricity from renewables instead of increasing fossil fuel-fired generation can reduce greenhouse gas emissions. These reductions can be maximized by ensuring the mix of electricity used to charge the storage technology is very low-carbon. However, electric energy storage could increase greenhouse gas emissions if electricity from less expensive high-carbon baseload coal power plants is stored and replaces more expensive peaking power from lower-carbon natural gas generators.

Storage can defer new generation and transmission investments, improving grid reliability and stability at a lower cost. In addition, energy storage can provide other benefits known as ancillary services—those that are needed for an efficient, stable and reliable electricity grid. Storage can also help during extreme weather events. During Hurricane Maria in 2017, 20 MW of energy storage provided critical grid reliability in the Dominican Republic.

There are several storage methods, varying in the amount of energy stored, the length of storage time, and how quickly stored energy can be released. Some technologies are more appropriate for providing short bursts of electricity for power quality applications, such as smoothing the output of renewables from hour to hour (and to a lesser extent, within a time scale of seconds and minutes). Some highly sensitive equipment such as computers can fail if the flow of electricity is not smooth and predictable.

Other technologies are useful for storing and releasing large amounts of electricity over longer time periods (known as peak-shaving, load-leveling, or energy arbitrage). Renewable electricity or other available output can be stored during periods of low demand and released during periods of higher demand. For example, wind farms often generate more power at night when winds speeds are high but demand for electricity is low. Electric energy storage could be used to shift this output to periods of high demand. Similarly, storage could capture excess overnight generation from a baseload nuclear power plant. 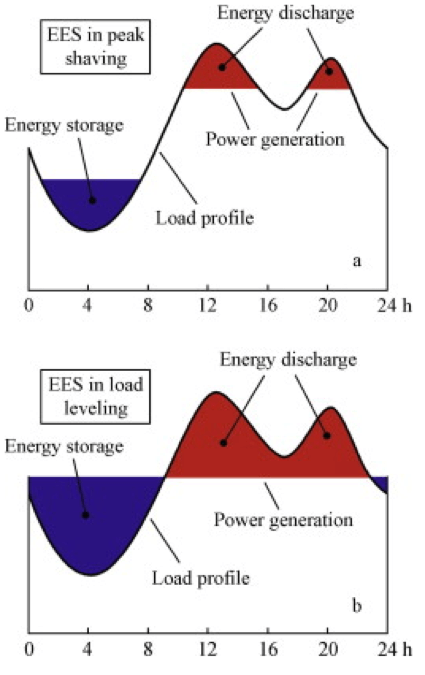 The use of electric energy storage is limited compared to the rates of storage in other energy markets such as natural gas or petroleum, where reservoir storage and tanks  are used. Global capacity for electricity storage, as of September 2017, was 176 gigawatts (GW), less than 2 percent of the world’s electric power production capacity. Of that global storage capacity, 24 GW is in the United States (about 2.2 percent of U.S. production capacity).

The up-front capital costs of electric energy storage vary by technology and capacity. Total capital costs per unit of power capacity for most storage technologies are high compared to a $1,000–$1,350/kW natural gas power plant.

A Lazard study published in December 2016 showed the costs of most battery storage technologies had declined, although cost varies based on the specific technology type and use. The capital cost of lithium-ion based batteries, for example, had decreased 24 percent, to $386–$917/kWh, from Lazard’s previous study in 2015. Below is a table that summarizes the current capital costs of other storage technologies.

In addition, the International Renewable Energy Agency (IRENA) projects battery capital costs will decline in the next few years: 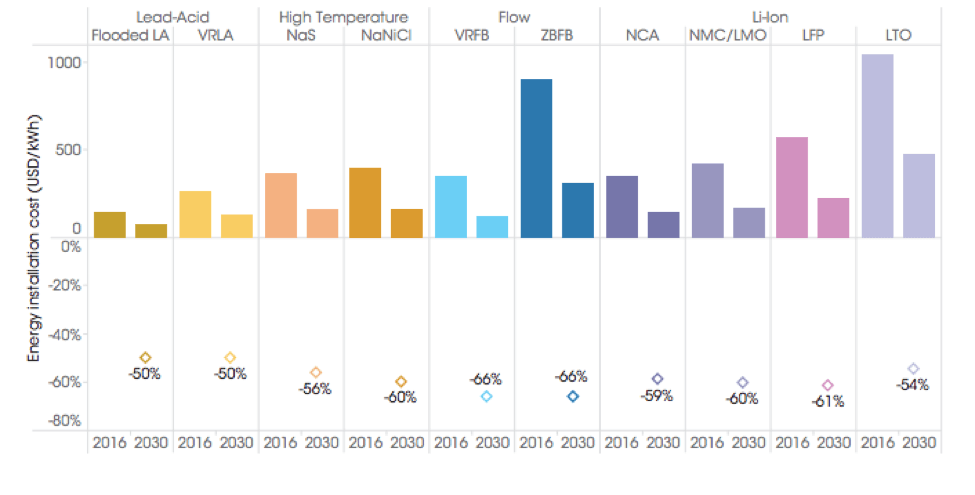 A price on carbon, such as a greenhouse gas cap-and-trade program, would raise the cost of electricity produced from fossil fuels relative to low-carbon sources. Electric energy storage would then have increased value where relatively inexpensive low-carbon electricity could be stored to displace carbon-intensive power.

If consumers were charged a real-time, dynamic price for electricity, the high cost of peak electricity would be transparent, and investments in electric energy storage to reduce peak load would have greater value. A national smart grid would facilitate real-time electricity pricing. California has started transitioning its commercial, industrial, and agriculture customers to this pricing structure as a result of a directive from the California Public Utilities Commission.

Electric energy storage can serve generation and transmission functions, but existing deregulated electricity markets place limits on who can own such facilities. Removing restrictions on the ownership of energy storage facilities by end-use customers, transmission owners, or distribution companies could enable greater market penetration.

Basic and Applied Research and Development

Capital costs of most electric energy storage technologies are still high compared to natural gas generators that provide similar services, but costs for batteries have recently declined significantly and are still expected to continue to do so.

Transmission planning only takes into account the location of demand centers and generation facilities. As a result, geographically remote electric energy storage facilities like pumped hydro or CAES have limited access to the transmission grid.

Federal and state regulations treat electric energy storage as a type of electricity generation technology rather than as an investment in transmission capacity. Thus, transmission and distribution companies are barred from owning electric energy storage. Another barrier is the lack of utility rate decoupling in states. Since utility profits are typically tied to the volume of energy sales, there is an incentive to sell more energy. Under decoupling, programs like energy efficiency and greater energy storage deployment are more likely to be promoted. In addition, most renewable portfolio standards or government investment or production incentives exclude energy storage, despite the fact that energy storage can enable higher penetration of renewables.

Most regions of the United States have not yet fully developed markets and transparent prices for all the types of ancillary services that electric energy storage (and generation) technologies provide besides providing electricity, such as regulation, spinning reserve, load-following, and other services.