Is Climate Change to Blame for Record-Setting Tornado Reports?

Every spring, as cool dry air from Canada clashes with warm, moist air from the Gulf of Mexico, the eastern U.S. experiences an uptick in the number of tornadoes. If you’ve been following the news over the past few weeks or living in affected areas, you may be wondering: is climate change making these devastating storms worse?

There were 516 reported tornadoes in May, including a record-setting thirteen-day stretch with at least 8 tornadoes per day. Among the hundreds of tornadoes were two EF4 tornadoes (meaning windspeeds of between 166 and 200 mph) that hit Linwood, Kansas and Dayton, Ohio. Thirty-eight people have died in ten different tornadoes this year, and May’s series of tornadoes adds to damages from those hitting across the South, Midwest, and Northeast in February.

There is a justifiable perception that tornadoes are getting worse. More than one-third of $1 billion weather disasters in the last 25 years were due to tornadoes, and damages from tornadoes have increased more than all other categories of extreme weather since 1980. But is this a result of climate change?

The answer is maybe, and it’s complicated. 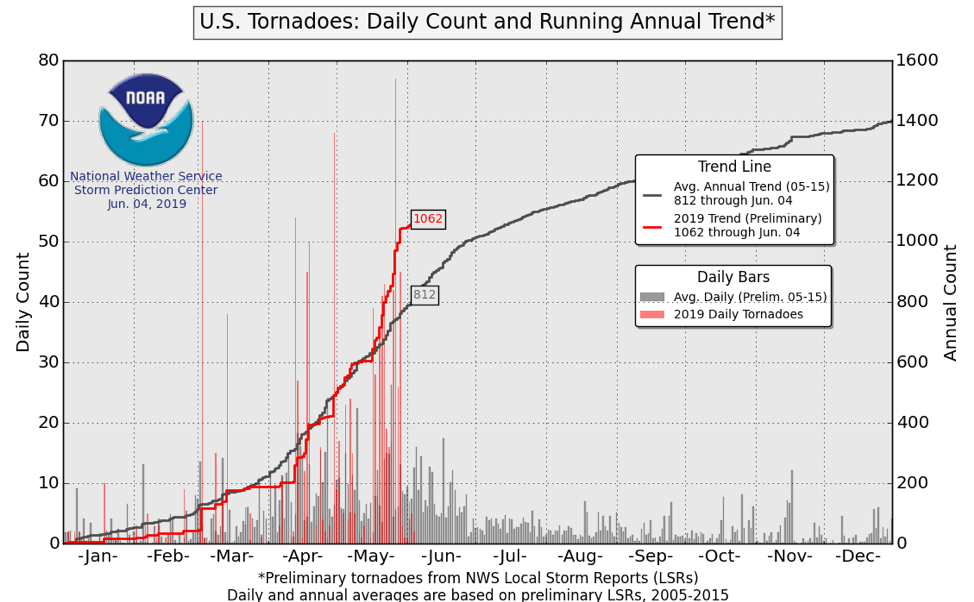 This NOAA graph shows the many days of daily tornado activity in 2019 (red bars) that were well above the daily averages of the past decade (gray bars).

Additionally, the red trend line shows that the U.S. has had over 200 more tornadoes than the average total of tornadoes (the black trend line) experienced up until this point in the year for the past decade.

Many weather events, like tropical rainstorms, are occurring more, are more damaging, and last longer, because of climate conditions. The way that scientists consider the role of climate change is through “event attribution” studies.

Scientists can model these changes in extreme weather events and see, for instance, that warming temperatures mean more evaporation that can increase the frequency of heavy rainfall and snowfall. Scientists are also able to trace climate change influences in individual weather events (like Hurricane Harvey, Hurricane Maria, wildfires in Alaska, etc.) by simulating weather events to compare the likelihood or intensity of the event in a world with human-caused climate change versus a world without it. Scientists use this method to consider the natural and human-caused factors that can combine to make an extreme weather event more likely, or more intense. 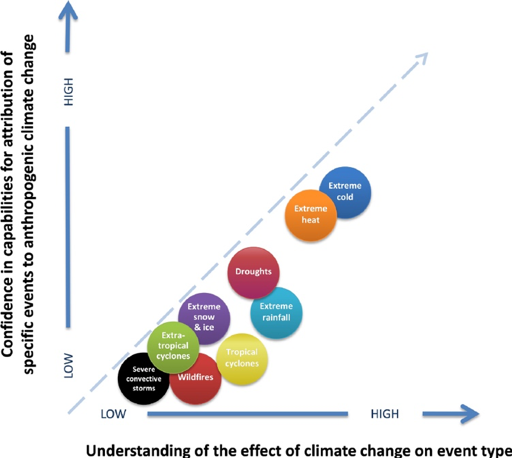 This graphic demonstrates that scientists are better able to understand the effects of climate change on temperature and precipitation events. For events related to a more complex set of factors (such as wind, soil moisture, etc.), it is difficult to determine the effect of climate on that event, and very difficult to attribute specific events of that type to climate change.

While there have been many advances in the greater science of event attribution, it’s really tricky for tornadoes.

First, tornado records are relatively limited. Records only go back to the 1950s, and tornadoes are mainly measured only after people observe them or their physical damage. Most of the increase in tornadoes across historic records is likely related to improved radar and increased reporting (a result of larger populations in areas affected by tornadoes) rather than to a growing occurrence (which may also be happening). This means we don’t have a longer-term sense of what “regular” patterns or behavior of tornadoes are, making it hard to isolate and identify changes.

Secondly, tornadoes are very geographically limited and also are relatively brief events when compared to droughts and hurricanes, while climate models are very coarse, averaging climate conditions over larger areas. That makes it difficult to simulate tornadoes specifically.

While they’re still hard to directly link to climate change, we have seen some tornado trends:

The conditions were right for the series of tornadoes in May because of the jet stream. Inconsistencies in jet stream patterns create extreme weather conditions across the country, with some places experiencing above average heat while others experience flooding and still others experience abnormally cool temperatures. Some scientists think that the abnormalities in the jet stream could be related to reduced Arctic sea ice and warmer temperatures in Alaska, effects potentially linked to climate change.

As scientists seek to better understand how climate change affects tornadoes, they are looking at conditions that could create “severe convective storms” including any storms that produce strong winds, hail, tornadoes, lightning, or heavy precipitation. Unusually warm, humid air conditions in the lower atmosphere and cooler-than-usual conditions in the upper atmosphere can create strong updrafts and down drafts. Vertical wind shear turns that energy into convective storms. A warming climate could increase the likelihood of certain conditions but not all of them, making the outcome for tornadoes very difficult to predict. Scientists are working to model these environmental variables.

Despite the progress in attribution science in recent years, we still have a long way to go with events that are affected by more complex factors than just heat or moisture. But this uncertainty in the link between climate change and tornadoes should not obstruct community decision making. Stronger building codes that prepare buildings and improved early warning systems and evacuation procedures can help communities better prepare for tornadoes as well as for confirmed climate impacts like flooding and wildfire.

Making Cents of the Cost of Climate Change