The growing intensity and frequency of severe weather events like extreme rainfall, extreme heat, and drought can be directly attributed to climate change, but the link between tornadoes and climate change is currently not fully understood. Challenges remain that prevent clearer attribution, including: limited data collection methods, high year-to-year variability, and difficulty modeling key physical elements that help tornadoes form as well as directly modeling tornadoes due to their small size.

Tornado records date back only to the 1950s in the United States, and vary significantly from year to year, making it difficult to identify long-term trends. The assessment of tornado wind speeds from associated damage may also have been less consistent before the 2007 implementation of the Enhanced Fujita (EF) Scale for tornado damage intensity. In addition, measuring the presence of tornadoes relies on eyewitness accounts and aftermath damage assessments rather than quantitative data. As the population in many areas affected by tornadoes has grown, we have seen an increase in eyewitness reports and property in harm’s way, leading to a larger number of recorded tornadoes, especially weaker ones. Additionally, improved radar technology helps us identify severe storms that may produce tornadoes that may not have been detected decades ago.

Despite these challenges, studies have found a few trends in the United States by using portions of the record that are more reliable, like data for very strong tornadoes. Although the number of days with tornadoes has fallen, other trends are increasing, including outbreaks with 30 or more tornados in one day, the density of tornado clusters (i.e., tornadoes are closer geographically), and the strength of tornadoes. The distribution of tornadoes has also shifted eastward. These trends have not been directly linked to climate change.

An added difficulty in determining future tornado frequency and intensity caused by changes in the climate is that tornadoes are too geographically small to be well simulated by climate models. However, models can simulate some of the conditions that contribute to forming severe thunderstorms that often spawn tornadoes. Researchers are working to better understand how the building blocks for tornadoes—atmospheric instability and wind shear—respond to global warming. It is likely that a warmer, more humid world allows for more frequent instability, while it is also possible that a warmer world decreases wind shear. Multiple studies find that the conditions that produce the most severe thunderstorms from which tornadoes may form are more likely as the world warms. Climate change may also cause a shift in the seasonality of severe thunderstorms and the regions that are most likely to be hit.

As scientists improve their physical understanding of the processes that cause tornadoes, and as climate models are run at higher spatial resolutions, our understanding of the climate change influence on tornadoes will improve. Likewise, as the observational record increases over time, trends will likely become more obvious.

Definition of a Tornado

Tornadoes are formed by a combination of atmospheric instability and wind shear. Instability occurs when warm, moist air is wedged under drier, cooler air aloft. This warm air rises, causing the intense updrafts and downdrafts seen in strong thunderstorms — the incubators of tornadoes. Wind shear refers to changes in wind direction and speed at different elevations in the atmosphere. The combination of instability and wind shear forms the rotating column of air that we associate with a tornado. Tornadoes that form over water are known as waterspouts.
Tornadoes are assigned a rating, similar to hurricanes, based on wind speed. The scale used for tornadoes in the United States is the Enhanced Fujita Scale. The weakest tornadoes are classified as EF0, with a 3-second gust of 65-85mph, and the strongest tornadoes are classified as EF5, with a 3-second gust of over 200mph. 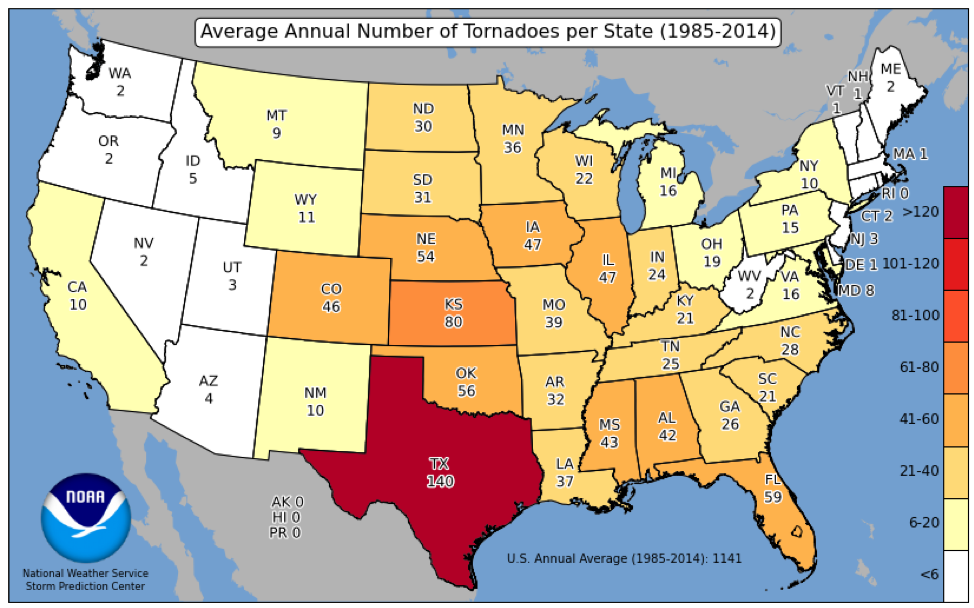 A 30-year average for tornadoes per state from 1985-2014. The entire United States experienced an average of 1141 tornadoes per year in this time period. Graphic: NOAA 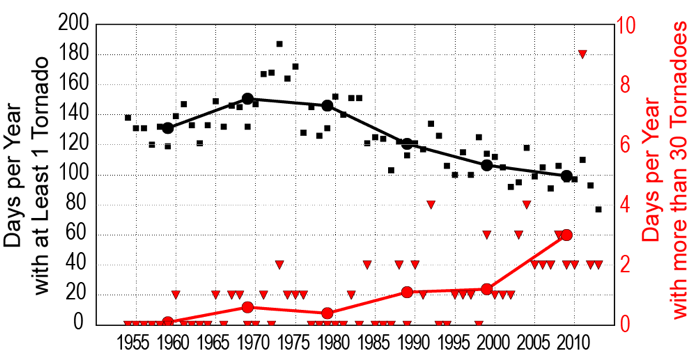 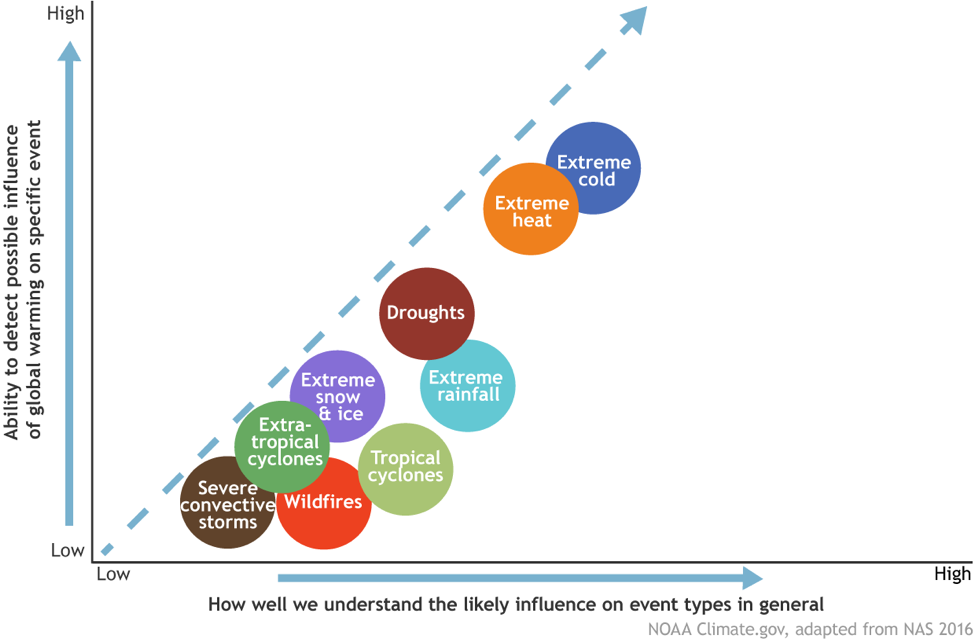 This image, adapted from the National Academy of Science’s 2016 report, “Attribution of Extreme Weather Events in the Context of Climate Change” depicts the state of attribution science for different climate event types. The vertical position corresponds with the confidence in attribution science and the horizontal position indicates the level of understanding of how climate affects that type of event. There is both low levels of understanding about how climate affects severe convective storms (which include tornadoes) and low ability to detect global warming influences.

The most significant threats from tornadoes are the dangers posed by strong winds and debris that is caught up in winds. Although individual tornadoes may affect a relatively small area compared to large tropical storms, they still threaten people, homes, and communities. NOAA estimates that, on average, about 1,200 tornadoes occur across the country annually, but several hundred more or fewer tornadoes can occur in any given year.

The death toll from tornadoes has dropped rapidly because forecasters have more tools to detect dangerous weather and warn people to take shelter. However, tornadoes still cause billions of dollars of property damage a year. The costliest year on record for tornado damage was 2011, when seven tornado and severe weather outbreaks each caused more than $1 billion in damages, and the total damage for the year was more than $28 billion.

How to Build Resilience to Tornadoes

Communities can bolster their resilience and reduce the impacts from tornadoes by:

This map and related materials pertaining to all types of extreme weather can be found here. Last updated August 2021

Winter weather in Texas and the importance of infrastructure resilience investment