Multiple gases contribute to the greenhouse effect that sets Earth’s temperature over geologic time. Small changes in the atmospheric concentration of these gases can lead to changes in temperature that make the difference between ice ages when mastodons roamed the Earth, and the sweltering heat in which the dinosaurs lived.

Two characteristics of atmospheric gases determine the strength of their greenhouse effect.

The first is their ability to absorb energy and radiate it (their “radiative efficiency”).  The second is the atmospheric lifetime, which measures how long the gas stays in the atmosphere before natural processes (e.g., chemical reactions) remove it.

These characteristics are incorporated in the Global Warming Potential (GWP), a measure of the radiative effect (i.e. the strength of their greenhouse effect) of each unit of gas (by weight) over a specified period of time, expressed relative to the radiative effect of carbon dioxide (CO2). This is often calculated over 100 years, though it can be done for any time period. Gases with high GWPs will warm the Earth more than an equal amount of CO2 over the same time period. A gas with a long lifetime, but relatively low radiative efficiency, may end up exerting more warming influence than a gas that leaves the atmosphere faster than the time window of interest but has a comparatively high radiative efficiency, and this would be reflected in a higher GWP.

The table below presents atmospheric lifetime and GWP values for major greenhouse gases from the Fifth IPCC Assessment Report (AR5) released in 2014. These values are periodically updated by the scientific community as new research refines estimates of radiative properties and atmospheric removal mechanisms (sinks) for each gas.

Despite carbon dioxide’s comparatively low GWP among major greenhouse gases, the large human-caused increase in its atmospheric concentration has caused the majority of global warming. Likewise, methane is responsible for a large portion of recent warming despite having a GWP much lower than several other greenhouse gases because emissions have increased drastically.

* No single lifetime can be given for carbon dioxide because it moves throughout the earth system at differing rates. Some carbon dioxide will be absorbed very quickly, while some will remain in the atmosphere for thousands of years.

The table below shows the relative concentrations of these major greenhouse gases and their sources. Some gases (like CO2) are made by both natural and manmade processes, while others (like hydrofluorocarbons) are only the result of human industrial activity. CO2 is typically measured in parts per million because it is 1,000 times more prevalent than the other gases, but is shown as parts per billion in the table for consistency.

The Rise of Atmospheric Carbon Dioxide 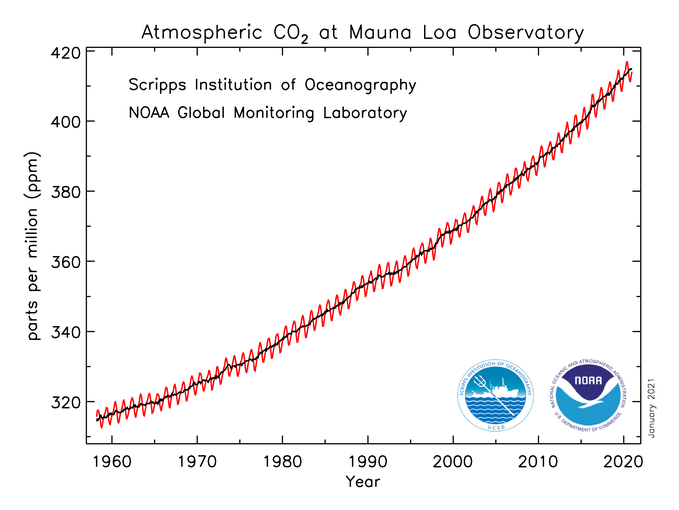