On April 13, 2014, the Intergovernmental Panel on Climate Change (IPCC) released Working Group III’s report on the Mitigation of Climate Change.

The report lays out a number of “baseline” scenarios (those without additional mitigation actions or policies).  These scenarios lead to substantial warming by the end of the 21st century, with global mean surface temperature increases in 2100 from 3.7 to 4.8 degrees C (6.7 to 8.6 degrees F) relative to pre-industrial time.

In addition, a number of potential mitigation scenarios are also described.  These scenarios explore ways that some of this warming can be avoided, and how decisions in the near-term affect our ability to avoid longer-term warming. 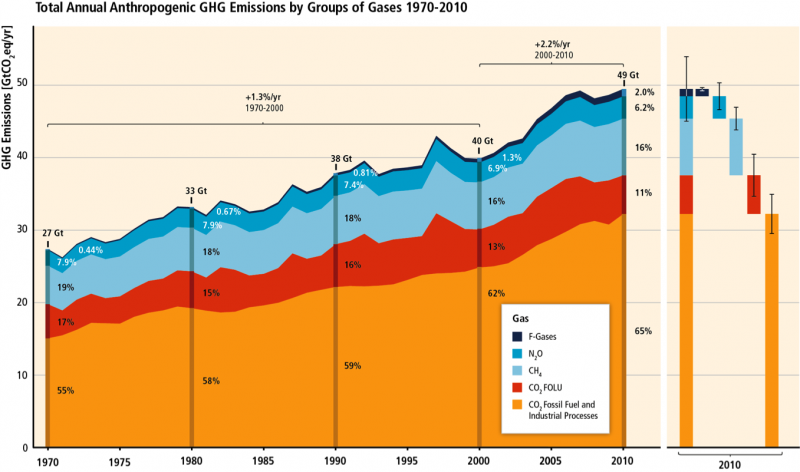 Figure SPM.1 from WG III report shows the global anthropogenic GHG emissions from 1970-2010, with the contribution from different gases shown by the colors.  To the right, the 2010 emissions are broken out, showing the relative uncertainties associated with each gas.  Note: “FOLU” is the acronym for “Forestry and Other Land Use.”

This portion of Figure SPM.4 from the WG III report shows the share of global energy that would need to come from low-carbon sources for four different mitigation scenarios.  For all the scenarios, the share of low-carbon energy is relatively large (>70% or higher) at the end of the 21st century.  Only the most aggressive scenarios (shown at the right side of the diagram, in dark and light blue) are likely to keep warming below 2 degrees Celsius – these scenarios include rapid growth of low-carbon energy, in which its share exceeds 50% of global energy by 2050.