Under a carbon tax, the government sets a price that emitters must pay for each ton of greenhouse gas emissions they emit. Businesses and consumers will take steps, such as switching fuels or adopting new technologies, to reduce their emissions to avoid paying the tax.

A carbon tax differs from a cap-and-trade program in that it provides a higher level of certainty about cost, but not about the level of emission reduction to be achieved (cap and trade does the inverse).

Taxes on greenhouse gases come in two broad forms: an emissions tax, which is based on the quantity an entity produces; and a tax on goods or services that are generally greenhouse gas-intensive, such as a carbon tax on gasoline. We explore how to set a federal carbon tax more in depth in Options and Considerations for a Federal Carbon Tax.

Several carbon tax proposals have been introduced in Congress in recent years. In the 117th Congress (2021–2022), five carbon pricing proposals have been introduced (as of October 2021), and the Senate Finance Committee is reportedly considering inclusion of a carbon price in the Build Back Better Act, the Biden administration-backed reconciliation package. 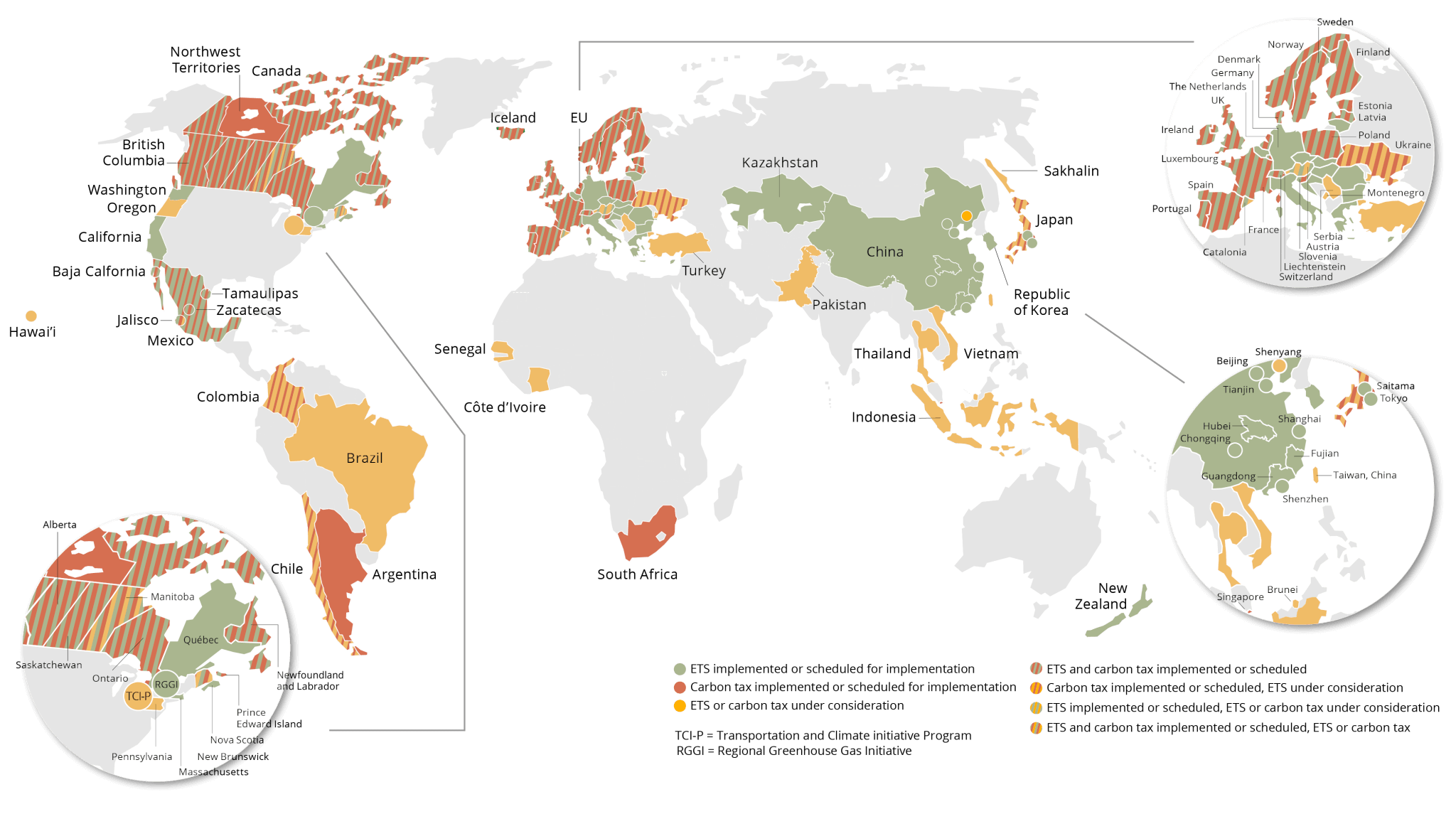 See the interactive Carbon Pricing Dashboard. “Scheduled for implementation” means countries have formally adopted carbon pricing through legislation and have an official start date; “under consideration” means the government has announced its intention to work toward implementation.

A number of countries, regions, and local governments around the world have a carbon tax or a something similar like an energy tax related to carbon content. As of 2021, 35 carbon tax programs have been implemented across the world. For example, British Columbia, has had carbon tax since 2008. South Africa became to the first African country to implement a carbon tax in 2019. In 2006, the city of Boulder, Colorado, became the first U.S. city with a directly voter-approved carbon tax, and other cities are exploring the idea.

In the United States, interest in an economy-wide carbon tax has been gradually growing. Debate often centers on how to use the revenue generated by a tax. One idea is to use the revenue to reduce taxes on productive activities, like payroll or corporate taxes. Other ideas include giving it back to all consumers, in the form of a carbon dividends, or using it to pay for infrastructure improvements. A 2017 study estimates a tax of $49 per metric ton of carbon dioxide could raise about $2.2 trillion in net revenues over 10 years from 2019 to 2028.

So far in the 117th Congress (2021–2022), five carbon pricing proposals have been introduced. Moreover, carbon tax proposals have been introduced in Congress for several years without success, but supporters hope that the need for new revenues to pay for tax reform or infrastructure will make it more politically appealing. The economic implications of taxing pollution are well understood, but political viability is the primary challenge.

As of October 2021, the Senate Committee on Finance is considering a fee on carbon emissions as one way to help pay for a budget reconciliation package. The committee is considering a number of approaches. The most effective approach under consideration would be per-ton fee on emissions from fossil fuels that starts at a modest level and increases over time. This fee would be collected “upstream,” at the minemouth, wellhead, or point of import—making it simple to administer. When paired with a border tax measure, such a carbon fee would immediately become the single most important policy to reduce U.S. emissions and enhance U.S. competitiveness in a global economy.

Options and Considerations for a Federal Carbon Tax

Policymakers must consider a range of design choices, including:

Scope – The scope of the carbon tax depends on substances covered. For instance, a carbon tax could be levied on the carbon dioxide content of fossil fuels.

Point of Taxation ­– A carbon tax can be levied at any point in the energy supply chain. The simplest approach, administratively, is to levy the tax “upstream,” where the fewest entities would be subject to it (for instance, suppliers of coal, natural gas processing facilities, and oil refineries). Alternatively, the tax could be levied “midstream” (electric utilities) or downstream (energy-using industries, households, or vehicles).

Tax and Escalation Rates ­– Economic theory suggests a carbon tax should be set equal to the social cost of carbon, which is the present value of estimated environmental damages over time caused by an additional ton of carbon dioxide emitted today. The tax rate should also rise over time to reflect the growing damage expected from climate change. An increasing price over time also provides a signal to emitters that they will need to do more and that their investments in more aggressive technologies will be economically justified. One of the challenges of a carbon tax is forecasting the resulting level of emissions reduction from a specific tax rate. Building in review and opportunity for adjustment can help, but also reduces the one of the values of a carbon price – price certainty.

Competitiveness – Without provisions protecting local production, a carbon price could put domestic energy-intensive, trade-exposed industries (EITEs), such as chemicals, cement/concrete, and steel, at a competitive disadvantage against international competitors that do not face an equivalent price. A shift in demand to those countries could result in “emissions leakage” from one country to another—reducing the climate benefit of a carbon price. All existing carbon pricing programs include mechanisms to address competitiveness concerns. These include allocations based on historical emissions, output-based allocations, exemptions for select sectors, and rebates. There is growing interest in a carbon border adjustment as a preferred approach to address emissions leakage and incentivize emission reductions.

Revenues ­– A carbon tax can raise significant revenue. How that revenue is used will ultimately be a political choice. Some or all of it could be returned to consumers in the form of a dividend. Alternatively, it could be reinvested in climate purposes, such as advancing low-carbon technologies or building resilience. Economic research suggests that using the revenues to reduce existing taxes on labor and capital—also known as a tax swap—can minimize the economic costs and may result in net economic benefits.

Options and Considerations for a Federal Carbon Tax

Carbon pricing offers a cost-effective way to reduce greenhouse gas emissions. Twelve states are already pricing carbon, and a number of states are considering similar action. This factsheet summarizes and compares five federal carbon pricing proposals that have been introduced …