Why the United States Needs a Clean Electricity Standard

A critical component of the Biden administration’s American Jobs Plan is challenging the power sector to achieve 100 percent clean energy by 2035, creating thousands of jobs in the process. To help meet that goal, the plan includes an Energy Efficiency and Clean Electricity Standard, but this important provision was left out of the recently agreed-upon Bipartisan Infrastructure Framework. In order to meet the administration’s greenhouse gas reduction targets, including the Paris Agreement U.S. commitment of 50–52 percent reduction below 2005 levels by 2030, the United States will need to challenge the status quo. A federally-mandated, technology-inclusive clean electricity standard (CES) would provide the push and the flexible framework needed to help reach these ambitious goals.

A CES offers a flexible, market-based policy that would set aggregate targets for the amount of clean electricity that electric utilities must sell. Importantly, the CES should be technology-neutral to allow for fair competition between different low-carbon resources such as wind, solar, hydro, nuclear, geothermal, fossil fuel with carbon capture, and energy storage. In general, the CES would provide the opportunity for eligible technologies to receive credits based on the amount of clean energy they generate. These credits could then be traded between utilities or generators, creating a more efficient and market-based solution. The CES ideally would be designed with increasing yearly targets, allowing for reasonable, but cumulative progress.

Similar policies have already proven successful at the state level. Almost three-quarters of U.S. states have adopted some form of clean or renewable energy targets, with most in the form of a renewable portfolio standard (RPS). The targets and structure of these state policies vary widely, but the programs have shown good results. According to Lawrence Berkeley National Lab, roughly half of all growth in U.S. renewable electricity generation and capacity since 2000 is associated with state RPS requirements, along with help from federal tax incentives.

However, an assortment of state-level policies will not be enough to fully decarbonize the electricity sector and to meet the Biden administration’s goals in the timeframe required to address climate change. A federal CES would provide a number of benefits, including increasing development and deployment of new clean energy, stimulating job growth, mitigating environmental and public health impacts from fossil-fuel generation, making clean energy more cost competitive, allowing for cleaner end-use electrification in other sectors, and ultimately helping to reach emissions-reduction goals.

Currently in the United States, only about 40 percent of electricity generation comes from low-carbon sources, with about half of that from nuclear and the other half from a mix of renewables. The rest largely comes from natural gas at 40 percent and coal at 19 percent. As shown in the chart below, coal-generation levels have dramatically declined over the past decade, but natural gas generation has steadily increased. Due to its declining economic viability, coal generation likely will continue to decrease, but additional policies will be needed to reduce the nation’s reliance on natural gas (with uncaptured emissions). A well-designed CES would increase the relative competitiveness of clean energy generation, forcing fossil fuel generators to contend with the costs of their greenhouse gas emissions. 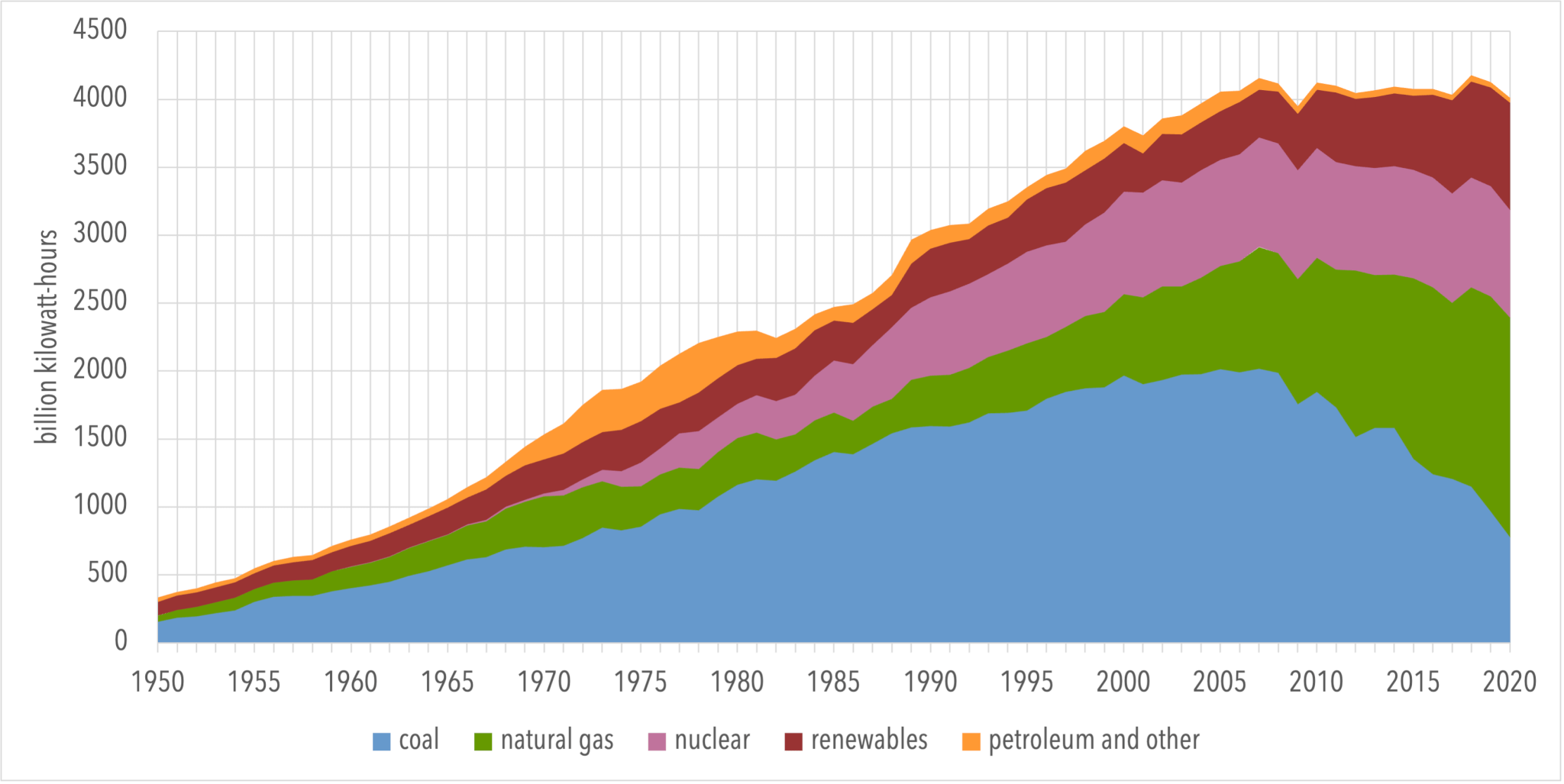 In addition to incentivizing new clean-energy development, a well-designed CES would help keep existing clean energy online. Although nuclear power provides the majority of clean energy generation in the United States, many nuclear plants around the country have been forced to shut down before the end of their lifetimes due to economic challenges caused by the falling costs of natural gas and renewable generation, and low growth in electricity demand. In every case, the retirement of these nuclear plants led to an increase in fossil fuel generation and greenhouse gas emissions. However, the revenue nuclear plants would receive from selling zero-emission credits, established by a federal CES, would recognize the value of their ability to generate clean electricity, boosting their economic viability. Similar programs already have proven to be successful at the state level.

Electricity generation in the United States contributes roughly a quarter of the country’s greenhouse gas emissions (second only to the transportation sector). The power sector will play a central role in the decarbonization of the U.S. economy. Fortunately, renewable energy has quickly become one of the cheapest sources of energy generation. In some locations, it is even cheaper to build new renewable energy than it is to continue running existing coal power plants.

However, decarbonizing the electricity sector alone will not be enough to meet the administration’s emissions reduction targets. While economy-wide carbon pricing is the most economically efficient means of decarbonization, in its absence, a CES provides an effective, strategic tool for leveraging reductions in other sectors. The transportation sector is responsible for 29 percent of the country’s greenhouse gas emissions, and the residential and commercial sectors together are responsible for another 13 percent. Electrifying these sectors as much as possible, through switching to electric vehicles, heat pumps, and other electric appliances will be necessary. This shift in end-use technologies will increase demand for electricity, further amplifying the need for more clean power generation.

A federal CES would put the United States on a faster track to combat climate change. Along with the electrification of other sectors, transitioning to an 80 percent clean electricity grid by 2030 could result in a 50 percent economy-wide reduction in U.S. greenhouse gas emissions, allowing the country to meet its Paris commitment. Although there is broad public support for a federal CES, there are still a number of political barriers hindering its implementation. While we prefer a bipartisan CES that would provide a necessary and more durable solution, infrastructure bill negotiations have largely unraveled along a climate fault-line, signaling that this may not be possible.

We can no longer delay serious action on climate. As this rare window to pass significant climate legislation begins to close, and owing to the urgent nature of action necessary, we welcome efforts to pass a technology-inclusive federal CES under budget reconciliation as the next best option to a bipartisan agreement.