In its recent report on the role of carbon capture, utilization, and storage (CCUS) in clean energy transition, the International Energy Agency (IEA) made it clear that “reaching net-zero will be virtually impossible without CCUS.” Carbon reductions are needed on a gigaton scale to put the United States and the world, on the path to net-zero emissions. The unique opportunity that CCUS technologies offer is that they are capable of reducing emissions in hard-to-decarbonize sectors and removing carbon dioxide to balance unavoidable emissions. By doing so, CCUS offers a good opportunity for synergies between different sectors that can achieve decarbonization while protecting and creating more jobs.

To achieve decarbonization, especially in the industrial and power sectors, significant infrastructure upgrades are required. These upgrades are not limited to facility-level retrofits but must also include regional carbon transport infrastructure to deliver the captured carbon dioxide to utilization or storage sites. One of the main challenges for the industrial and power facilities in the United States is that they are mostly located in regions without significant geologic formations suitable for permanent storage. That is why shared regional carbon dioxide transport infrastructure is necessary for reducing investment requirements and costs.

Over time, regional CCUS networks would create opportunities for economies of scale with more carbon dioxide captured and stored by sharing common transport and storage infrastructure. This would likely help accelerate adoption and commercialization of other carbon dioxide removal technologies (e.g., direct air capture, bioenergy with carbon capture and storage). Also, it can unlock new economic opportunities, particularly when the captured carbon dioxide becomes a valuable input commodity for low carbon fuels, chemicals, and building materials. There is already an emerging market for carbon dioxide-derived building materials such as concrete, where the carbon used is stored in the material, itself. However, broader deployment of such utilization technologies would require further performance demonstrations and updating product standards.

As industrial and power facilities tend to be concentrated in the same regions, these industrial hubs offer an opportunity for commercial synergies and economies of scale. For example, ethanol facilities that are concentrated in the Upper Midwest can aggregate their carbon dioxide supplies and use shared pipelines to deliver it to geologic storage locations in the Lower Midwest or the Gulf Coast region.

Researchers from the Great Plains Institute looked into the most feasible near- and medium-term opportunities for deployment of regional CCUS projects that can unlock the economic potential for the industrial and power sectors to capture carbon and safely store it. They estimated that more than 350 million tons of carbon dioxide can potentially be captured and stored annually by scaling up and optimizing regional carbon transport and storage infrastructure. This is more than a fifteenfold increase of the current carbon capture rate in the United States. As shown in the figure below, investing in large trunk pipelines can substantially reduce the overall cost by transporting huge volumes of carbon dioxide from different emitting facilities to the designated geologic storage sites. 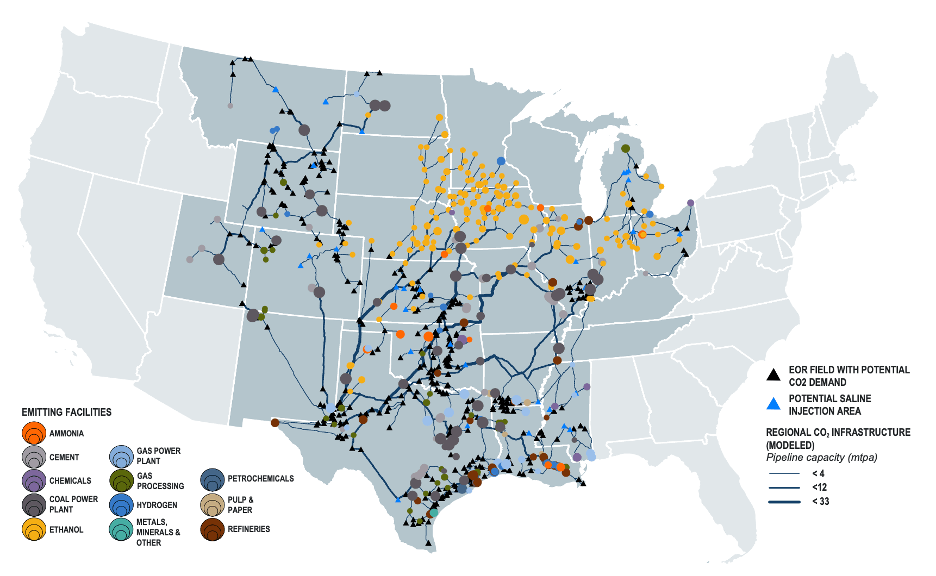 The Biden administration has recently unveiled a new package of infrastructure initiatives under The American Jobs Plan that could help build a more resilient energy system and create jobs. To accelerate deployment of regional CCUS projects, the plan includes improving the bipartisan Section 45Q tax credit to provide a direct-pay option for project developers to overcome tax equity markets constrained by the pandemic. It also includes expanding the 45Q tax credit to allow more projects in hard-to-decarbonize sectors and emerging technologies such as direct air capture. The plan also builds on the Storing CO2 and Lowering Emissions (SCALE) Act to provide financing for front-end engineering and design (FEED) studies to enable deployment of large-scale carbon transport and storage infrastructure.

These large-scale projects can help reduce industrial and power sector emissions while maintaining and unlocking economic activity and jobs across the country. Building carbon infrastructure now is essential to allow time for the technology to scale up and reach the capture levels needed to achieve decarbonization by midcentury. Also, this would provide the certainty needed to attract more private investments in carbon capture and storage projects.  For example, investing in digital-enabling infrastructure increased the digital share of the total economy from 7.3 percent ($948.4 billion) in 2005 to 9 percent ($1,849.3 billion) in 2018.

As Congress is trying to help millions of Americans who became unemployed during the pandemic, large-scale deployment of carbon capture projects would create tens of thousands of jobs over the next 15 years. Investing in regional carbon transport and storage infrastructure represents a great opportunity for bipartisan cooperation to build a competitive low-carbon economy and put the U.S. on track to meet midcentury climate goals.

A net-zero by 2050 commitment needs an aggressive interim target

Carbon capture and the race to net zero