Director of Climate Resilience and Sustainability, Center for Climate and Energy Solutions

The Intergovernmental Panel on Climate Change’s recent 1.5 Degree-C Special Report and the U.S. government’s Fourth National Climate Assessment clearly demonstrate the harsh reality that accelerated climate action is needed to avoid the worst effects of unchecked warming. Here in our own backyard, we must continue to take the steps we can to reduce our impacts. This charge is especially relevant in the transportation sector, which has become the largest source of U.S. greenhouse gas emissions (27 percent) and contributes a large portion of the country’s air pollution.

Many local governments would like to reverse this troubling trend. One strategy is to change the type of vehicles on the road, and although cities cannot determine the cars that people drive, they can take action and lead by example.

A recent survey of 156 cities conducted by C2ES and the U.S. Conference of Mayors (through the Alliance for a Sustainable Future) suggests that alternative fuel vehicles such as hybrids, biodiesel, and electric vehicles are becoming an increasingly attractive option for local government fleets. Of the 122,000 municipal fleet vehicles reported nationwide, 84 percent are owned by cities with a green vehicle procurement policy on the books.

But does having such a policy mean a city will follow through and buy green vehicles? The survey results suggest it might. Responding cities with green procurement policies have many more alternative fuel vehicles than their counterparts without such policies. Aggregated fleet profiles for municipal passenger cars and medium- and heavy-duty vehicles – the two largest vehicle classes for municipal fleets reported in the survey – are shown below. 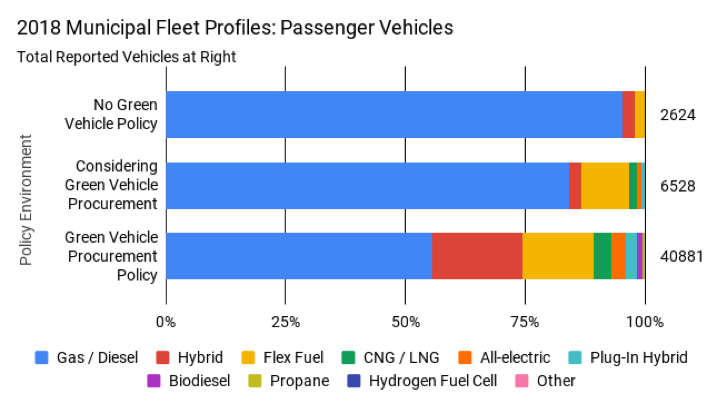 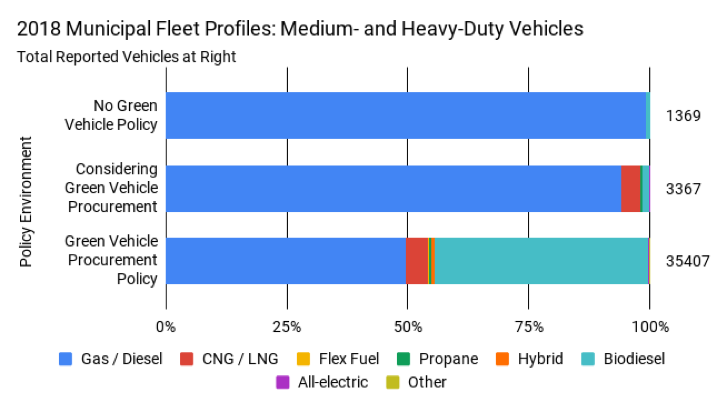 The expanding vehicle market is almost certainly facilitating this shift. With each year, fleet officials are finding that there are more EV models to consider. The U.S. Department of Energy’s Alternative Fuels Data Center reports that the number of available electric vehicle models rose from zero in 2007 to 27 in 2015 and then to 46 in 2017.

Of course, for all the focus on the types of vehicles on the road, there should be equal focus on the number of miles traveled and the amount of fuel consumed (here, cities are employing new sensor-based technologies, navigation systems, and anti-idling policies to optimize trips). City fleets that track and manage these metrics can ensure that efforts to adopt alternative fuel vehicles actually result in emissions reductions.

City governments play a substantial role in accelerating the shift to cleaner municipal fleets each year. The surveyed cities expect to purchase 14,000 municipal vehicles in the next year; 80 percent of which will be made by local governments with green procurement policies. The findings indicate that these governments tend to include alternative vehicles in their purchases, so it is not a stretch to expect increasingly green fleets.

Demonstrations and pilot initiatives play an important role in the transition. After a six-month pilot to test heavy-duty and off-road vehicles on a 99 percent renewable diesel fuel blend, New York City has just announced its intention to exclusively use the cleaner alternative for its 13,000 diesel-powered vehicles.

Recent mayoral leadership may also accelerate adoption. Los Angeles Mayor Eric Garcetti announced the EV Purchasing Collaborative in September. Part of the effort includes dozens of cities that have committed to purchase nearly 400 electric vehicles. Additionally, the Collaborative provides a platform for cities of all sizes to access procurement resources and pre-negotiated deals, which has the potential to make an even larger impact. Such tools could further speed the transition in markets across the country.

A shift of this kind presents new opportunities and challenges for the private sector. Automobile manufacturers may find that that new low-carbon models will enter a more accepting marketplace of fleet managers, but necessary infrastructure may be lacking. And as EV adoption grows, electric utilities like Duke Energy, Pepco, and others are increasingly eager to satisfy the resulting growth in electricity demand. Both have filed requests with public service commissions to expand charging infrastructure, and Duke has already made progress establishing a program in Florida.

City governments are a driving force behind the growth of the EV and alternative-fuel vehicle market, and our survey forecasts their impact will only grow. Cities are setting an example, and sending a critical signal to automakers, the power sector, and policymakers that the market is here to stay. If the U.S. is to meet its greenhouse gas reduction goals by mid-century, it will be through supporting and accelerating this type of leadership.

Sharing the benefits of electrified transportation with diverse communities

Director of Climate Resilience and Sustainability, Center for Climate and Energy Solutions