In California, it’s almost impossible to avoid hearing about the drought. Restaurants serve water only upon request, “Save Our Water” radio ads run daily, and the issue headlines news broadcasts.

The persistent drought threatens to increase the risk of wildfires, damage crops, and harm wildlife. For example, UC Davis researchers estimate the state’s farm industry could lose $1.7 billion and nearly 15,000 jobs in 2014 due to the drought.

While Californians are no strangers to drought, this one in particular is cause for alarm. For the first time in the 15-year history of the National Drought Monitor, the entire state faces ‘severe’ (in yellow in Figure 1 below), ‘extreme’ (in red), or ‘exceptional’ (in dark red) levels of drought. In fact, October 2013-September 2014 could wind up being one of the driest periods in nearly 500 years.

Relief is unlikely to come soon. The Climate Prediction Center at the National Oceanic and Atmospheric Administration (NOAA) suggests the drought will persist and intensify in California through the summer.

Figure 1. The entire state of California is experiencing severe, extreme, or exceptional drought.

This is the first time this has happened since the Drought Monitor began such classifications 15 years ago. Source: US Drought Monitor: California, (National Drought Mitigation Center, 2014), http://droughtmonitor.unl.edu/Home/StateDroughtMonitor.aspx?CA 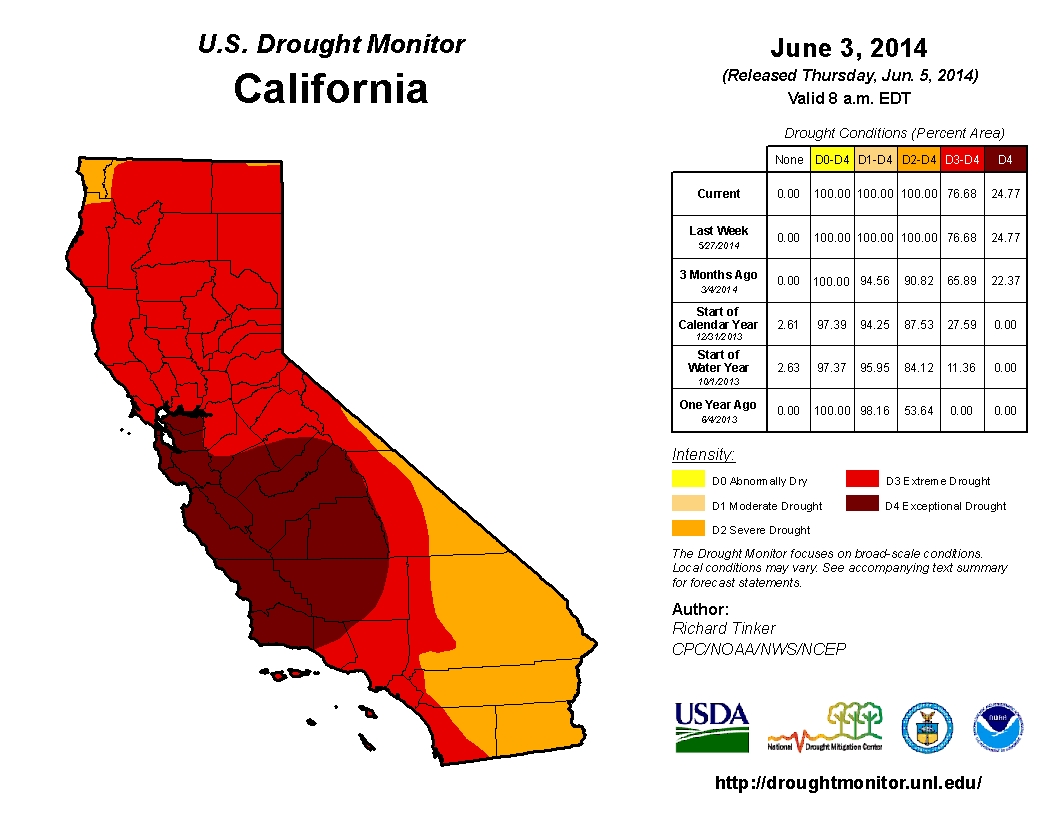 California relies on rain and snow in the fall and winter to carry it through the typically dry spring and summer. But rain and snow were scarce this year and the state’s main water reservoirs are only about half full (See here for the data). Facing big demands from 38 million residents and water-intensive agriculture, California’s water system is feeling the strain.

This year’s drought is primarily the result of a high pressure zone that Stanford University researchers are calling the “Ridiculously Resilient Ridge,” or the Triple R (See Figure 2). Ridges tend to come and go during the winter, but the Triple R lasted for an unprecedented, and currently unexplainable, 13 months. The 2,000-mile-long ridge kept much of California warm and dry between November 2013 and January 2014, while the trough delivered cold Arctic air to much of the Midwest and Eastern United States.

Figure 2. The yellow and red colors show the ridge in the circulation of the upper atmosphere (about 5 km above the Earth’s surface) over much of the Pacific, while blue and purple colors show a “trough” over the eastern portion of North America. 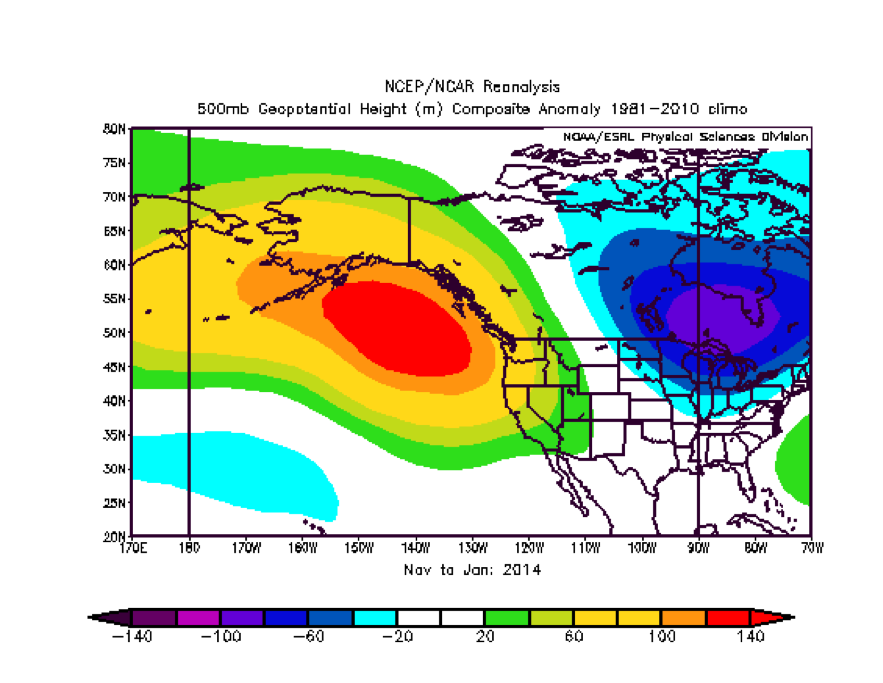 Droughts have occurred before and we will continue to see them in California and other Western states, regardless of climate change. However, there are many ways climate change can affect droughts, often exacerbating their impacts. For example, climate change is likely to reduce snowpack, threatening an important natural reservoir across the West. Rising temperatures are also likely to drive up water demands for agriculture and energy, placing further stress on limited supplies.

California is an example of the potential future for other Western states. While the country takes steps to reduce the greenhouse gas emissions contributing to climate change, drought-prone states will need to take steps to build resilience to what could be longer and more severe droughts.