Charting a path to reduce greenhouse gas emissions can be a challenge. Changing the perceptions and habits of employees, customers, and stockholders isn’t easy. But if done effectively, it can bring award-winning results.

Fifteen organizations and two individuals received Climate Leadership Awards for driving climate action and reducing greenhouse gas emissions. The awards are given by the U.S. Environmental Protection Agency’s Center for Corporate Climate Leadership with the Center for Climate and Energy Solutions (C2ES), the Association of Climate Change Officers and The Climate Registry. 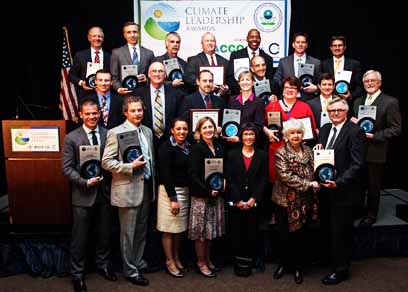 At the Climate Leadership Conference in San Diego, three award winners shared key strategies that could help others take action.

1. Get buy-in from top management.

“The key to success is leadership,” said Eugene Agee, vice president for procurement, real estate, and environmental health and safety at Sprint. “It starts with the CEO.”

Sprint CEO Daniel Hesse insisted that greenhouse gas management be a formal part of corporate strategy. Amy Hargroves, director of corporate responsibility, created a sustainability council, a group of vice presidents regularly reporting to her on the company’s efforts. Those executives surrounded themselves with experts to explain the specifics of energy and greenhouse gas management.

“Get it to its simplest component. That’s what drives success,” Agee said. “What’s coming up that I need to take a role in?”

Sprint, which was honored for both organizational and supply chain leadership, focused on its major source of emissions: operation of its wireless network. Its efforts included placing more than 500 hydrogen fuel cells at network cell sites; conducting energy audits; and automating heating, cooling and lighting systems.

Sprint is also working with its suppliers to improve their environmental sustainability and has pressed suppliers to take steps that include measuring, reporting, and setting a reduction target for greenhouse gas emissions.

The company beat its original goal of cutting greenhouse gas emissions 11 percent from 2007 levels by 2018. Through 2012, Sprint had cut its carbon footprint 18 percent and set a new target of 20 percent. Sprint also set a goal to secure 10 percent of its electricity from renewable sources by 2017.

2. Keep the issue at the forefront.

The city of 250,000 has set a goal to reduce its greenhouse gas emissions 20 percent from 1990 levels by 2020. The city set energy efficiency requirements for buildings 15-20 percent higher than state code. It worked with private-sector partners to install electric vehicle charging stations at municipal buildings and recreation centers. And it’s working to minimize climate-related risks to energy and water supplies, coastal resources, and public health.

City Manager Jim Sandoval set up a cross-disciplinary team from all city departments to work with citizen groups and regularly report back to the mayor and council. As the city put elements of its plan into place, it got people involved at every level.

“We had contests for naming components and programs, designing logos and other initiatives,” Bensoussan said. “People want to help, and they want to help even more if they can have a direct effect on the bottom line.”

“If a company wants to be an environmental leader, there’s going to be a lot of push-and-pull pressure on everything, especially if the company is privately held,” said Gwen Migita, vice president for sustainability and community affairs at Caesars Entertainment. “We had to have a lot of people in different areas understand how sustainability drives business strategy. How does it improve earnings?”

Caesars, which operates casinos, hotels, golf courses, and racing venues, was honored for achieving its greenhouse gas management goals. It has focused on improving energy efficiency without diminishing guests’ experience. Despite company growth that increased its physical footprint by 18 percent, Caesars cut its absolute emissions more than 11 percent between 2007 and 2011, beating its goal.

Every company or organization seeking to be a climate leader will face unique challenges. By making sure key players are involved from the start, keeping the issue on the front burner, and making sure everyone understands how environmental responsibility aligns with the bottom line, leaders can lay the groundwork for cutting emissions and becoming more sustainable.

Climate change-fueled extreme weather and climate impacts take their toll on communities throughout the United States and on the companies that anchor them. Given the scale of threats facing communities and businesses, it is critical that private sector fully activate …

Targeted policies to address extreme heat in the United States