The Biennial Report is the first required of parties to the U.N. Framework Convention on Climate Change as part of a series of measures aimed at ensuring greater transparency about steps countries are taking to meet their international climate pledges.

The figure below helps visualize the challenge facing the United States. The blue bar on the left represents 100 percent of U.S. emissions in 2005, or 7,195 million metric tons of carbon dioxide-equivalent emissions. On the right side is the 2020 goal to reduce emissions by 1,223 million metric tons, or 17 percent. 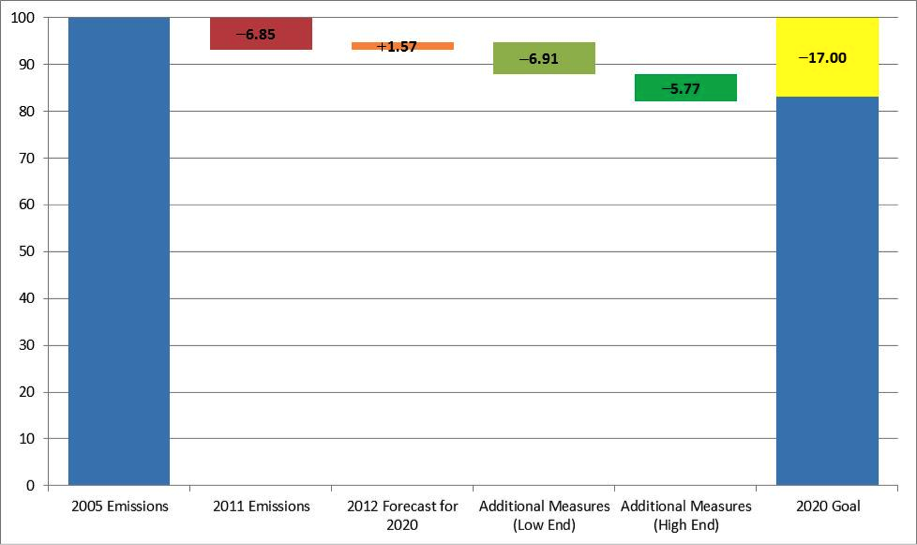 A number of factors, both market-based and policy-related, have contributed to this decline. And reductions have occurred in all economic sectors:

Unfortunately, U.S. emissions reductions have hit a wall. As natural gas prices have inched up from historic lows in 2012, electricity generators are burning more coal. Energy-related emissions crept up 2 percent last year. The Energy Information Administration’s business-as-usual forecast, which assumes no new policies, is not encouraging. It projects energy-related emissions will increase 1.57 percent (orange bar on the chart), or 113 million metric tons, by 2020. Therefore, additional policy measures must be quickly adopted and implemented if the United States is to meet its climate pledge.

The additional policy measures identified in the Biennial Report correspond to many of the executive actions outlined in the Climate Action Plan announced by President Obama in June 2013. Each action is classified under one of three greenhouse gas categories: hydrofluorocarbons (HFCs), methane, and carbon dioxide.

The report projects HFCs could be reduced by phasing in alternative compounds with lower global warming properties in a range of uses (refrigeration, air conditioning, cleaning solvents, aerosols, etc.) in accordance with a proposed amendment to the Montreal Protocol. This would result in up to 135 million metric tons (carbon dioxide-equivalent) in reductions.

Additionally, the president has directed U.S. agencies to develop a comprehensive strategy for reducing methane emissions, including measures to reduce leakage from coal mining and natural gas production. These actions could result in up to 90 million metric tons (carbon dioxide-equivalent) in methane reductions.

Finally, the administration projects that 75 percent of the total reduction needed to meet the 2020 climate goal, or 800 million metric tons, will come from reductions in energy-related carbon dioxide emissions. However, it is unclear from the report precisely what mix of policies will achieve that result.

The report, for instance, lists new carbon limits on power plants among the policies that will contribute to meeting the 2020 goal. But those limits were not among the policies included in the computer modeling done to show quantitatively how the U.S. will reach the target. (This may be because EPA has yet to propose limits on existing power plants, making it hard to model them.)

Instead, the modeling assumes a mix of policies that includes: extending renewable energy subsidies (which in fact have not been renewed this year), strengthening energy-efficiency standards for appliances and equipment, increasing industrial efficiency, making buildings more efficient, and reducing vehicle miles traveled.

In aggregate, the report projects a range of possible reductions — anywhere from 610 million metric tons or 6.91 percent of the climate pledge (at the low end), up to 1,025 million metric tons or an additional 5.77 percent (green bar) of the climate pledge (at the high end). Only if the high-end estimates are achieved would our 17 percent emission reduction goal be realized.

With fewer than six years until 2020, the United States must close the remaining gap by implementing new policies. A range of policies has been proposed, but swift adoption and implementation is by no means assured.

Emissions standards for existing power plants — the centerpiece of the president’s Climate Action Plan — are not expected to be formally proposed by EPA until later this year. Then it will take a year to finalize them, and longer for states to develop and for EPA to approve implementation plans. Legal challenges from various camps also threaten to delay the process.

As the report modeling has shown, pledged emission reductions are plausible. But it remains to be seen if they will be strong enough or can happen in time.

As one of the largest greenhouse gas emitters, the United States must do its part to lower its emissions, not only to help avoid the worst potential impacts of climate change, but also to demonstrate international leadership. As nations work toward a stronger international climate agreement next year in Paris, it is important that countries like the United States meet their pledged targets. This can serve to strengthen countries’ confidence in one another, in the process, and in our collective ability to overcome the climate challenge.

Outcomes of the UN Climate Change Conference in Sharm El-Sheikh

Labeled the “implementation COP” for being the first conference held after the last of the Paris Agreement’s rulebook was agreed in Glasgow, the United Nations Framework Convention on Climate Change (UNFCCC) 27th Conference of the Parties (COP27) in Sharm el-Sheikh, …

For decades, a precision agriculture (PA) revolution has been ‘just around the corner,’ promising to transform American agriculture. While precision technologies—including variable rate applications, soil sensors, autosteering systems, and others—have significant potential to improve environmental outcomes, they have yet to …