Chilling out on the Polar Vortex

This week’s brief but bitter cold snap over more than half the country prompted intense discussion about the polar vortex ranging from educational to bombastic.

So let’s be clear: The cold snap this week was unusual but not entirely unprecedented. A few super-cold days don’t disprove global warming, just like a day of rain doesn’t end a drought. At the same time, we don’t yet know whether climate change will change the odds of future outbreaks of bitter cold. Research is still underway, and as of now, we shouldn’t necessarily expect these events to be more or less frequent in future winters.
Here’s a Q&A to cut through the hype:

It’s important to note that this figure is an average of many winter days. On any given day, we would see a number of deviations from this average pattern.

Figure 1. A depiction of the “average” polar vortex on Jan. 6. The winds of the vortex correspond to the narrow “rainbow” areas. The map is an average of the upper atmosphere’s “topography” (specifically, the 500 millibar height) from all the January 6ths between 1980 and 2010. 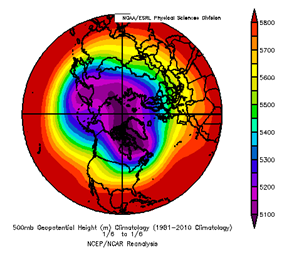 Figure 2. The polar vortex on Jan. 6, 2014. The ridge (“R”) and trough (“T”) responsible for relatively warm weather in much of the West and bitterly cold weather in the Midwest and East have been labeled. 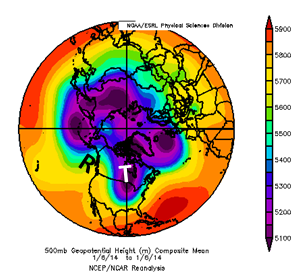 Although this week’s cold may be memorable, this ridge and trough pattern is far from unprecedented. See examples in Figure 3 from the winters of 1981 and 1994 when sub-zero temperatures hit a number of cities in the Midwest and East.

There is not yet a consensus within the climate science community regarding the impact of climate change on the “wiggles” in the jet stream. Some scientists say warming could cause large ridges and troughs to become more frequent or more persistent (see here, for example). Others consider current data inconclusive, and point to physical reasons and model simulations that support the opposite conclusion (see here and here).

Scientists continue to analyze historical data and perform experiments to better understand the physics of the atmosphere, in hopes of better answering the “what should we expect?” question. As they make progress, we will still contend with daily and weekly swings in the weather, occasionally bringing us a wintery Arctic blast.

Other resources on the polar vortex: