Hurricane season just around the corner

Hurricane season officially starts June 1 and it looks like a busy one in the Atlantic.  The National Oceanic and Atmospheric Administration (NOAA) expects a well above-average hurricane season with 13 to 20 named storms. Seven to 11 of them could develop into hurricanes and three to six of those could be major (defined as category 3 or higher).  The average over about the past 30 years is 12 named storms, six hurricanes, and three major hurricanes per season.

NOAA also forecasts the “Accumulated Cyclone Energy (ACE),” which is an estimate of the total amount of energy Mother Nature will unleash through Atlantic tropical cyclones this year. ACE is expected to be 120 to 205 percent of the seasonal average, indicating a risk that hurricanes will not only be more frequent this year, but stronger as well.

Meanwhile, in the Pacific, where NOAA predicts a below-normal number of storms, the season’s first hurricane, Hurricane Barbara, made landfall in Mexico this week, the second earliest landfall since reliable records started being kept in 1966. 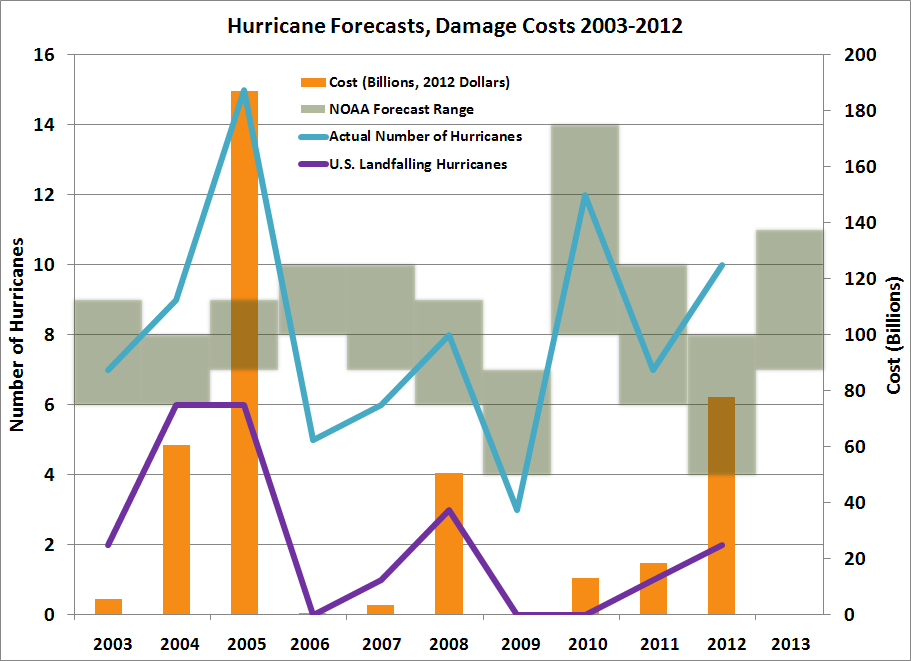 Over the past decade, NOAA forecasts have provided useful information about the upcoming season more often than not. NOAA had notably good forecasts in 2008, 2010 and 2011 (Figure 1). Yet 2005, the busiest Atlantic hurricane season on record, was not predicted.

It is important to note that these forecasts don’t tell us much about the regions that are at the highest risk or the potential costs (see Figure). This is a fact NOAA emphasizes: “It only takes one storm hitting an area to cause a disaster, regardless of the overall activity predicted in the seasonal outlook.  Therefore, residents, businesses, and government agencies of coastal and near-coastal regions are urged to prepare [for] every hurricane season regardless of this, or any other, seasonal outlook.”

Historical landfall location maps are a helpful guide to assess risk, as landfall clusters in the Gulf Coast, South Florida and along the Carolina coast attest, but risk exists outside those areas. No hurricane had made landfall in New Jersey since 1950 until Sandy caused billions in damages last year.

To prepare for hurricane season, coastal communities can reinforce buildings, protect dunes and wetlands, and develop an effective emergency response plan.  These actions are important not only to protect homes, businesses, and lives during this hurricane season, but also to build resilience to the impacts of hurricanes in the future.