Plug-In Electric Vehicles (PEVs) are a relatively new but growing segment of the vehicle market. They are powered by a domestic, reliable fuel source, and can reduce greenhouse gas emissions and improve local air quality. Innovative policies and promotional activities can accelerate their adoption, helping decarbonize transportation.

What is a PEV?

BEVs exclusively use electric motors powered by energy stored in battery packs to propel the vehicle. The energy stored in BEV battery packs is typically enough to achieve at least 90 miles on a single charge, though technological and manufacturing breakthroughs will soon likely allow ranges approaching or surpassing 200 miles.

PHEVs may be powered exclusively by electric motors in battery packs, which are considerably smaller than BEV battery packs, but are also supported by a secondary drive option. Some models feature a gasoline-powered engine, whereas other models feature a gasoline-powered generator that powers the drained battery (the latter style is sometimes referred to as an extended range electric vehicle).

PEVs charge by plugging into one of three types of charging stations:

The mass-produced PEV market sprang to life in late 2010, when GM released the plug-in hybrid Chevy Volt and Nissan released the all-electric Leaf. New models have been gradually introduced, though sometimes with limited availability outside California and the Northeast. PEV sales initially grew rapidly, but began to flatten after oil prices began dropping in mid-2014, with year-over-year sales remaining about constant through 2016. The flattening of the PEV adoption curve mimicked the market for fuel-efficient cars overall during times of low oil prices.

The PEV market has started to grow again and shows potential to rapidly expand. Year-over-year sales in the first half of 2017 are 50 percent higher than sales in 2016, and the PEV share of new vehicle sales exceeds 1 percent.

Analysts from the International Energy Agency, OPEC, and several oil companies have substantially increased their estimates of PEV growth in the past year, by up to 500 percent. Bloomberg New Energy Finance and Morgan Stanley both predict that new global PEV sales will outnumber traditionally fueled vehicle sales by 2050, if not sooner.

Reasons for the optimistic outlook include large-scale automaker commitments to PEV manufacturing, governments announcing plans to ban gasoline- and diesel-powered cars, and expectations for lower costs and better performance of PEV batteries.

Transportation is the largest single source of U.S. greenhouse gas emissions, with light-duty passenger vehicles accounting for approximately two-thirds of those emissions.

By using efficient electric motors and plugging into a grid using more renewables, PEVs can significantly reduce greenhouse gas emissions. According to an analysis by the Union of Concerned Scientists, the average PEV produces greenhouse gas emissions equivalent to a gasoline-powered car that get more than 70 miles per gallon. (The average new car in the United States achieves 25.3 miles per gallon.)

Electrified transportation is expanding beyond light-duty vehicles. Heavy-duty truck engine manufacturer Cummins and PEV manufacturing leader Tesla have developed electric drivetrains for tractor trucks. Thousands of BEV transit buses have been deployed around the world. Other heavy-duty PEVs are being tested and developed, from school buses to port and mining equipment.

The electricity that powers PEVs is produced domestically and is inexpensive when compared to gasoline and diesel. The transportation system and U.S. dependence on oil are fundamentally intertwined. In 2016, 97 percent of delivered energy to the U.S. transportation sector was from petroleum. Reducing reliance on oil, and particularly foreign oil, creates a more stable market because electric prices are much less volatile than oil prices (see chart below compiled by research from the Edison Electric Institute). Moreover, the efficiency of electric motors makes PEVs more affordable to operate. According to research by Idaho National Laboratory, the operating cost of a mile traveled in a PEV can be 3-5 times less than a mile powered by gasoline. 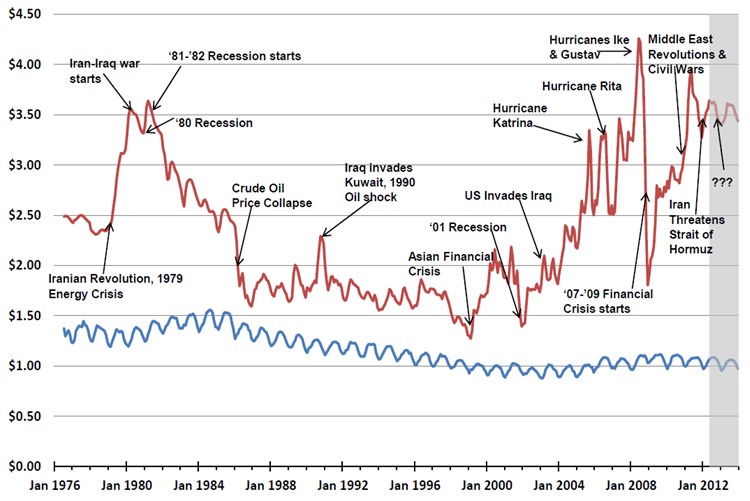 Consumers are adopting greater numbers of PEVs, but the market may still need some support to compete against the incumbent fuel sources, gasoline and diesel. The International Council on Clean Transportation estimates the value and impacts of these incentives in the 50 largest U.S. cities, finding that purchase incentives and readily available charging are linked to higher PEV adoption. Other incentives and policies include HOV lane access, emissions waivers, or special utility rates to charge PEVs.

Purchase incentives reduce the upfront costs of PEVs, which have been more expensive than equivalent gasoline-powered cars due mostly to the additional costs of the batteries. Federal tax credits are worth up to $7,500 per vehicle, although each automaker’s eligibility sunsets after 200,000 vehicles are sold. Many states offer rebates, tax credits, or tax waivers worth between $500 and $6,000.

Transportation is responsible for most air pollution in urban areas and produces the most greenhouse gases of any U.S. economic sector. To reduce these emissions, cities and businesses are considering deploying electric vehicles, which produce no tailpipe emissions that would …

This guide answers questions that private investors and state and local agencies, such as state energy offices, may have in deciding whether and to what extent they should invest in publicly available charging infrastructure.

This report for the U.S. Department of Energy summarizes the lessons learned from 16 government, educational and nonprofit groups that received grants to advance the deployment of plug-in electric vehicles (PEVs). Participants in projects across 24 states and the District …