Pennsylvania has the potential to become a major proving ground for carbon capture, utilization, and storage (CCUS), one of the key pathways to achieving a carbon-neutral economy.

This was the consensus of an expert panel on the June 4 C2ES webinar, Carbon Capture: A Pathway for Meeting Pennsylvania’s Environmental and Economic Goals. To attract large capital investments in CCUS projects, the state’s potential sequestration capacity of 88.5 gigatons provides certainty for project developers that the captured CO2 can be permanenetly stored. Among Pennsylvania’s many advantages is the capability to store hundreds of years’ worth of carbon dioxide due to the availability of different deep saline formations.

As a major oil and gas producing state, Pennsylvania also has huge potential for enhanced-oil-recovery (EOR), the process of injecting CO2 in the subsurface of existing oil and gas reservoirs to maintain the pressure of the reservoir and increase the recovery rate. The potential oil-and-gas field sequestration capacity of 760 million tons would allow deployment of CCUS technologies at large scale. This presents a near-term opportunity for CCUS deployment that can support further development of CCUS beyond EOR purposes in the long term.

As the nation’s second-largest natural gas producing state and with its expertise in pipelines, storage, retrofits and treatment processes, Pennsylvania’s natural gas industry is well-positioned to play a huge role in large-scale deployment of CCUS projects and infrastructure. As Pennsylvania State Senator Sharif Street highlighted during the webinar, “CCUS offers an opportunity for a prospering energy industry with new environmental standards and aspirations: technology that already exists, is economically sustainable, meets our goals for the environment, and allows us to create jobs and grow our economy.”

Expanding the CCUS capabilities in Pennsylvania would add to the current climate policy momentum in the state following recent actions by Gov. Tom Wolf to join the Regional Greenhouse Gas Initiative (RGGI)and to set a goal of reducing the state’s greenhouse gas emissions 80 percent by 2050. The power sector is responsible for the largest share of energy-related CO2 emissions in Pennsylvania, where a mix of coal and natural gas power plants generate most of the state’s electricity. Additionally, it is almost impossible for certain industries (e.g. cement) to reduce emissions without carbon capture, as the industrial process itself produces significant amounts of carbon emissions (13.76 MMTCO2e), regardless of the power source. Combined, these elements make CCUS a necessary and attractive tool to reduce the state’s emissions.

According to the speakers, the establishment of a carbon dioxide storage and transport utility is critical to propel the CCUS industry forward in Pennsylvania. Over time, regional CCUS networks would create opportunities for project developers to increase the scale of CCUS projects and reduce unit costs through sharing common transport and storage infrastructure. It would likely also help accelerate adoption and commercialization of other carbon dioxide removal technologies (e.g. direct air capture, bioenergy with carbon capture and storage). In addition, this emerging opportunity for “hubs and clusters,”as shown in the illustration below, could inspire new business models and attract larger initial capital commitment beyond tax credits. This concept separates capture from transport and storage infrastructure and investments which allows risk sharing among different public and private organizations.

As differently emitting industrial and power facilities tend to be concentrated in the same regions, hubs and clusters offer an opportunity for commercial synergies and economies of scale. 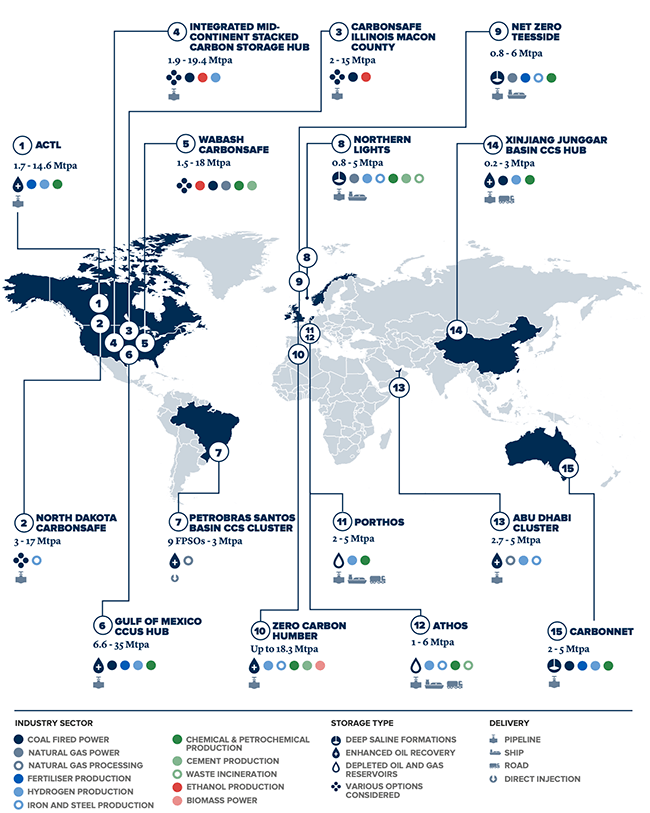 C2ES is grateful to our partners, the Pennsylvania Environmental Council, the Wilton E. Scott Institute for Energy Innovation at Carnegie Mellon University, and Clean Air Task Force, as well as our panelists from the U.S. Department of Energy, State of Pennsylvania, International Brotherhood of Boilermakers, and Gaffney, Cline & Associates, for their work to convene the June 4  dialogue on the challenges and opportunities of carbon capture and storage in Pennsylvania. We look forward to future opportunities to convene representatives from the private, public, and nonprofit sectors around the CCUS industry and the regulatory, technological, and funding needs required to propel the industry forward as a viable tool for carbon reduction and economic growth.

Build Back Better for Climate and Energy

A podcast: What’s Next After COP26?