The Building Blocks for Climate Leadership in the 2020s

By every measure imaginable, the new decade we have just begun demands action on climate change at a pace and scale never before seen. By the end of the 2020s, we must not only stabilize global greenhouse gas emissions but substantially reduce them and set ourselves firmly on the path to carbon neutrality. We can succeed only with strong political leadership.

As elusive as this leadership may appear right now, the essential building blocks are in place. As we close the books on the “20 teens,” it is helpful to consider the many types of foundational progress achieved that we can build on in the decade ahead. And, regardless of whether there’s support from the White House, it is time for Congress, governors, and corporate leaders to force durable climate solutions in which all U.S. citizens can see their own futures.

The 2010s will no doubt be remembered as the decade when the world truly began to experience the devastating impacts of climate-influenced extreme events.

In the United States, Hurricane Sandy (2012) triggered a conversation early in the decade about the relationship of climate change and patterns of extreme weather events. The 2017 hurricane season featuring Harvey, Irma, and Maria showed the multiplier effect of disaster coupled with the lack of resources to bounce back. Stronger hurricanes produced record flooding and winds (Irma broke records with sustained winds of 185 mph or above for 37 hours), exacting especially heavy tolls in disadvantaged regions – much of Puerto Rico is struggling to recover from Maria.

California’s 2018 fire season was the worst ever, with more than 1.8 million acres burned, more than 100 people killed, and 17,000 homes and 700 businesses destroyed. As the decade begins, Australia is experiencing record hot temperatures and unprecedented bush fires devouring millions of acres.

Over the course of the 2010s, the concentration of carbon dioxide in our atmosphere rose from 388 to 412 parts per million. The last time carbon dioxide levels were this high was during the Pliocene Epoch, 5.3 to 2.6 million years ago, before humans existed. On our present course, according to the U.N. Environment Programme’s latest Emissions Gap Report, global temperature increase will exceed 3 degrees C by 2100.

A Decade of Foundational Progress

Altering these trends and putting the world on the path to carbon neutrality is likely the greatest challenge we have ever faced. What terms like “energy transition” and “clean energy revolution” really mean is changing the entire way we power our modern society while also providing a decent living standard for all. We must not only change how we generate energy but nearly double its production in the next 30 years to meet rising needs. Perhaps it is not surprising that this transition is daunting and frustratingly slow.

There is an additional reality that attaining net zero by 2050 is slipping away and overshooting seems likely. For global sustainability efforts we can’t deter urgent action, and pushing for that goal is better than our current course. The last decade, however, has in many ways set the stage for turning the corner in the 2020s. There I see five important areas of “foundational progress”:

A key building block for leadership in the 2020s is the growing awareness of the effects of climate change. Gallup’s March 2019 survey (below) shows that a significant majority of Americans believe that climate change is caused by humans (66 percent), that scientists agree it is happening (65 percent) and that the effects have already begun (59 percent). By the end of the decade, 45 percent of Americans expected climate change to pose a serious threat in their lifetime and 44 percent said they worried a great deal about it. 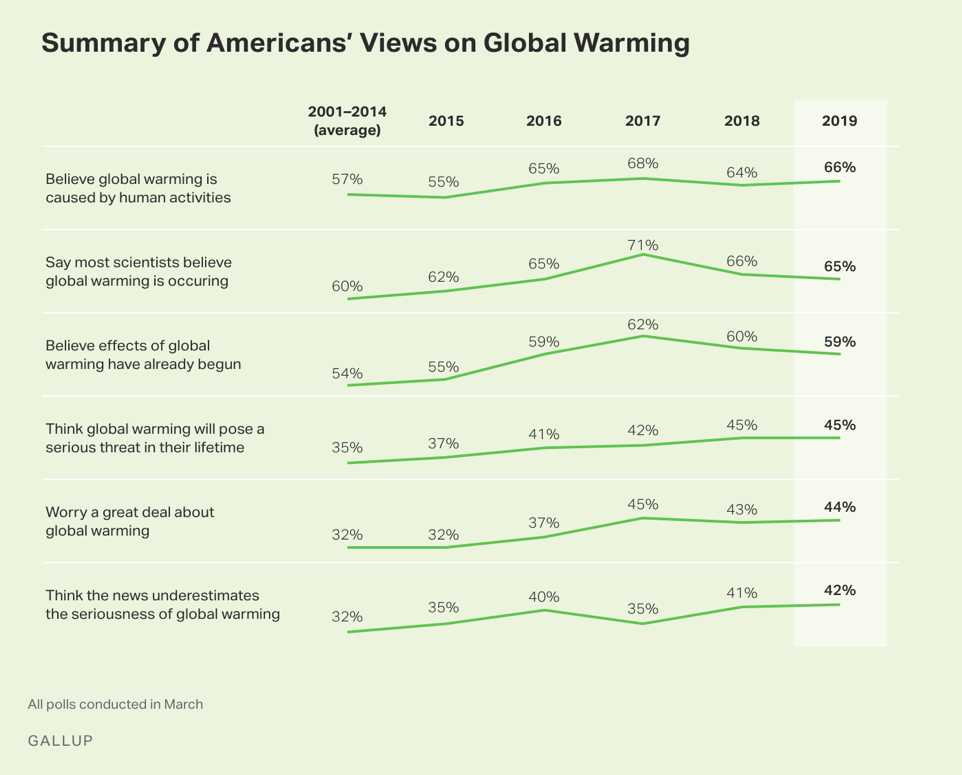 The growing recognition of the relationship between extreme events and climate change is even stronger with younger generations, which in turn is beginning to catch the attention of elected leaders. This is exemplified by the strong appeal of Greta Thunberg’s message but also evidenced by a CBS poll from September 2019 showing this age differentiation.

Perhaps the most important foundational achievement of the last decade was the 2015 Paris Agreement. Through its “Goldilocks” design, blending the right mix of top-down accountability and flexible bottom-up commitments, Paris provides the most promising framework ever for engaging all countries in meeting this global challenge.

U.S. leadership played a key role in delivering the Paris Agreement. Steps by the Obama Administration to reduce emissions from the power and transportation sectors gave the United States significant credibility as it undertook vigorous diplomatic efforts to bring China and the rest of the world along. The resulting agreement meets the bipartisan expectations set at the start of the global climate effort. And it is broadly supported by both American businesses and public.

The Paris Agreement can help to strengthen climate ambition over the next decade – but only with stronger leadership in the global community.

Another critical paradigm shift that came into view in the last decade is the growing emphasis on corporate responsibility, especially when it comes to climate change.

Investors are asking about longer-term risk, customers are seeking responsibly produced products, and employees (current and prospective) are looking for a workplace they can be proud of. Major corporations, from technology companies like Apple and Microsoft to large energy companies like Duke Energy, have publicly committed to net zero greenhouse gas emissions by the middle of the century. As we start a new decade, millions of Americans hold jobs working on climate solutions.

This is a game changer. Companies are no longer waiting for a government mandate to act – rather, they are advocating for government policies that will help them achieve their goals. By decade’s end, in a particularly telling shift, even the U.S. Chamber of Commerce has begun calling on policy makers to act.

A fourth area of foundational progress is the tremendous growth of climate action by U.S. states and cities. Twenty-five states representing more than half of U.S. GDP have pledged to meet the U.S. target under the Paris Agreement. Add to that the 440+ U.S. cities forming the Climate Mayors collaborative, and we have significant local political leadership for action. These growing subnational efforts can help pave the way for national policy in the next decade.

The last decade also witnessed remarkable technology advances. In 2010, electric vehicle sales in the United States were less that 5,000 for the entire year. As we closed out the decade, we reached 100,000 vehicles a quarter. Most analysts see price parity with internal combustion engine vehicles before or by the middle of this decade.

Bloomberg New Energy Finance, in its Electric Vehicle Outlook, says, “There is no sign of slowing down. We expect global annual passenger EV sales to rise to 10 million in 2025 and 28 million in 2029.”

Solar and wind generation coupled with advances in biomass and hydro power have continued to innovate and reduce costs. Here is a recent headline in Forbes: “Renewable Energy Costs Take Another Tumble, Making Fossil Fuels Look More Expensive Than Ever.” Since 2015, close to 50 percent of all new utility-scale electric power generation built in the United States was renewable.

Benefiting both battery electric vehicles and utility-scale power storage, battery prices dropped dramatically in the last decade, from well over $1000 per kWh to less than $200 with continued price improvement through the next decade. These cost improvements are being reflected in both improved range and reduced price for cars, and the pairing of battery storage with variable renewable power is enabling even greater use of renewable energy.

Improvements also continue in the carbon capture technologies needed for remaining fossil energy use in the power sector and, very importantly, in the industrial sector where carbon dioxide can be a by-product of the industrial processes themselves (cement, steel, and fermentation, for examples). The United States is a global leader in carbon capture technologies. Finally, existing zero-emission nuclear power plants continue to improve and increase output, with advanced and modular nuclear concepts gaining more support.

It is Past Time for Political Leadership

Even with the foundational progress achieved over the last 10 years, global temperatures continue to rise, climate-influenced events are causing more loss of life and increased costs, and emissions of carbon dioxide have continued to grow (though at a slower pace than two decades ago).

The United States is the most important global player. U.S. leadership helped the world come together for the Paris Agreement, and U.S. innovation helped drive this past decade of technological advancement.

If the world is to pick up the pace and capitalize on continued technological advances for a more sustainable century, the United States must regain its leadership role. We have lost this mantle as the Trump Administration has dismantled the domestic climate policies that gave the United States credibility (and more recently seeming to advocate for inefficiency with transportation, electricity, and water use) and as the United States, alone among countries, has walked away from the Paris Agreement. The administration has essentially given the world all the excuse it needs for inaction.

For the United States to again be a leader – and for the United States to win the economy of the future – we need to stop thinking it is 1950 and start visualizing 2050. With a growing majority of Americans understanding that climate change affects them personally, we now need political leadership that can help everyone see their own future in climate solutions. There are many frameworks that can help show the way, including C2ES’ “Getting to Zero: A U.S. Climate Agenda.”

Corporate leaders, now recognizing the need, must become more active pushing political leaders to step up and hammer out a durable set of solutions that capitalize on America’s innovation strengths.

There is no single solution to moving forward. That reality provides a great opportunity to devise a portfolio of measure that can be supported by diverse groups of stakeholders. Our “Getting to Zero” framework lays out sector-based policies and economic incentives that can build on the great foundations already in place, as well as broader long-term policies that can put us more squarely on the path to carbon neutrality.

The upcoming election will bear significantly on the prospects for stronger U.S. climate action. But whether or not we can count on the support of the White House in the coming years, it is incumbent on Congress, governors, and corporate leaders to drive action. The building blocks are all in place. This is an economic and sustainability battle that America is best positioned to win.

Communities across the United States are facing catastrophic extreme weather events that are growing in intensity and frequency due to climate change. Improving climate resilience can alleviate the impact of these events, but federal policies and programs fall short of …

A Conversation with Representative Scott Peters

Fireside Chat: Senator Sheldon Whitehouse (D-RI) on the “Save our Future” Act