With Hurricane Florence making landfall on the Southeast coast of the United States, Typhoon Mangkhut threatening devastation in the Phillipines, and Hawaii experiencing its unprecedented third hurricane this season, it’s a sensible time to look at the way coastal communities can better plan for storms of this type and build resilience to their impacts.

Forecasters are predicting a large storm surge, inland flooding, high winds, and heavy rain from Florence and similar conditions from Mangkhut on the opposite side of the world. While, of course, the immediate attention is on disaster response and recovery, how these coastal areas bounce back from these severe storm impacts is related to how they invested in resilience strategies like sea walls, levees, beach restoration, wetlands, and building elevation. Other coastal communities can take these powerful storms as a call to action, and increase their resilience before the next “Big One” arrives.

The strategies many communities employ to increase coastal resilience – like strengthening or elevating buildings, restoring ecosystems like wetlands or oyster reefs, or even limiting coastal development – are known to save money in the long run by avoiding storm losses. But how can the most cost-effective strategies with the greatest benefits be identified and employed?

Coastal communities have a long history of responding to hurricanes and addressing their aftermath, but climate change is making this task harder. Warmer oceans make these storms stronger, and rising seas make the storm surge they create even greater (not to mention the nuisance flooding that happens even on sunny days).

Climate change complicates the way communities evaluate the cost-effectiveness of actions to reduce the impact of hurricanes, because it increases the likelihood that a certain amount of damage will occur – meaning “100-year storms” may reoccur more often than they did in the past.

But new analytical frameworks accounting for those effects can help identify not only the economic benefits of resilience but also include risk from increased future development (because more property on the coast means growing potential for property damage) and how those costs and benefits stack up for communities up and down the coast.

A recent study from researchers at the University of California Santa Cruz, the Nature Conservancy, and ETH Zurich, used an open-source, probabilistic tool and the economics of climate adaptation (ECA) approach to offer an example of this type of planning. First, researchers estimated how climate change and coastal development increase the likelihood of storm damage along the Gulf Coast. They found, for example, that climate change and development by 2030 will make economic losses like those from Hurricane Katrina two to three times more likely to occur. In other words, the chance of a storm causing $131 billion in damages, as Katrina did, is two to three times more likely than it used to be. This is due in about equal parts to increased coastal development putting more structures at risk and climate change intensifying the strength and impacts of hurricanes. 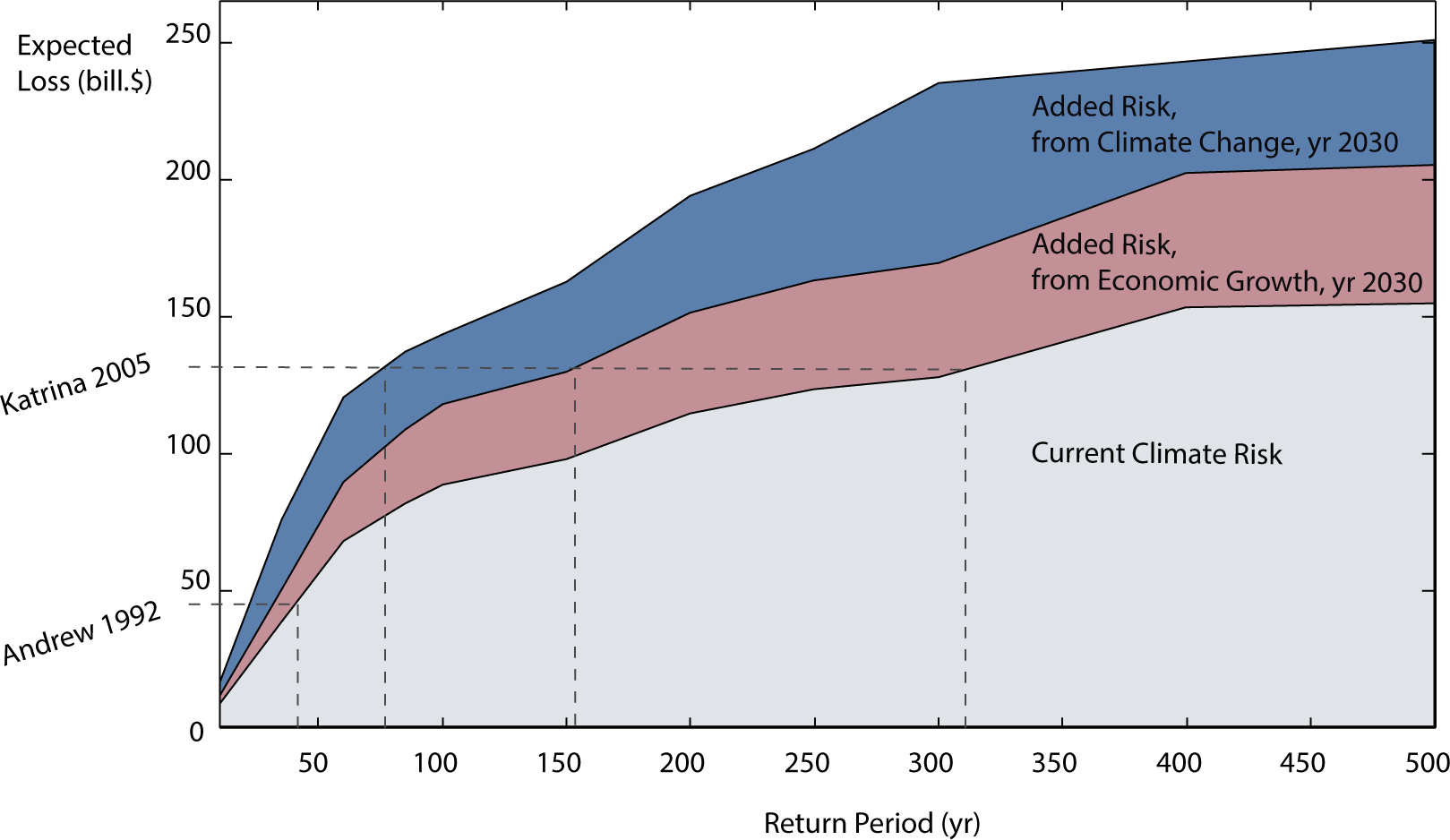 Expected losses for storms of given return periods, under current and projected future conditions. Losses from Hurricanes Katrina and Andrew are shown for comparison. The combined effect of climate change and coastal development is expected to make storms with equivalent return periods much more costly. Source: Reguero, et al (2018)

While climate change raises the risks, climate resilience strategies (like those being implemented today in New Orleans) can lower them.

To study the cost effectiveness of different resilience strategies, the research team went on to model different strategies along the Gulf Coast. The study including gray infrastructure projects, like levees and building elevation, along with green infrastructure projects, like wetland restoration and beach restoration. They estimated the varying costs of deploying these strategies from Texas to Florida as well as the avoided losses that each strategy could provide against future storms (accounting for climate change impacts and future coastal development). The result is an apples-to-apples comparison of both green and gray infrastructure measured in terms of economic losses.

This particular study found that over the course of decades, green infrastructure was more cost-effective than gray infrastructure with the exception of sandbags, which can be quickly and cheaply deployed to avoid flooding – at least, up to a point.

For coastal communities, prioritizing a limited budget for resilience investments is a complicated choice. Economic tools can help, but cost-benefit ratios are not always the deciding factor. Recent studies, community projects and C2ES publications reveal other benefits from resilience projects. For example, they can reduce flood insurance premiums and prevent wind damages, as illustrated in recent C2ES publications on flash flooding and power outages, or increase property values, as discussed in Resilience Strategies for Extreme Heat.

The bottom line is that there is no single silver-bullet. Resilience strategies need to work for communities’ indivudual needs. Some projects will get the green light because they promote social equity. Others will move forward because they avoid political controversies. Major hurricanes are always dangerous events, but communities that have resilience strategies will fare better in the long run than those that don’t.

Climate-Proofing the Grid: Strategies for Grid Modernization and Climate Resilience

The Inflation Reduction Act: A step toward strengthening resilience to drought

Communities across the United States are experiencing increasingly severe and frequent floods, wildfires, extreme heat, and other hazards due to climate change. These hazards are impacting local economies by damaging critical infrastructure and commercial districts, disrupting business operations, reducing municipal …