Action on VW settlement heating up as summer approaches

Summer is around the corner, bringing barbeques, warm weather, and road trips. U.S. residents may benefit from Volkswagen (VW) funding for those last two items (and Nissan bravely experimented with the barbeque): reducing air pollutants that cause harmful health effects in warm weather through a Mitigation Trust, and extending electric vehicles’ (EVs) driving range through a series of charging infrastructure investments. Both programs are set to take effect shortly, and cities and businesses may benefit from early action.

As a quick reminder, VW is putting $4.7 billion in two separate funds for mitigating nitrogen oxides (NOx) emissions and investing in zero-emission vehicles as part of a settlement for installing devices designed to bypass U.S. auto emissions tests. (The two funds are shown below and described in greater detail in this blog post.) 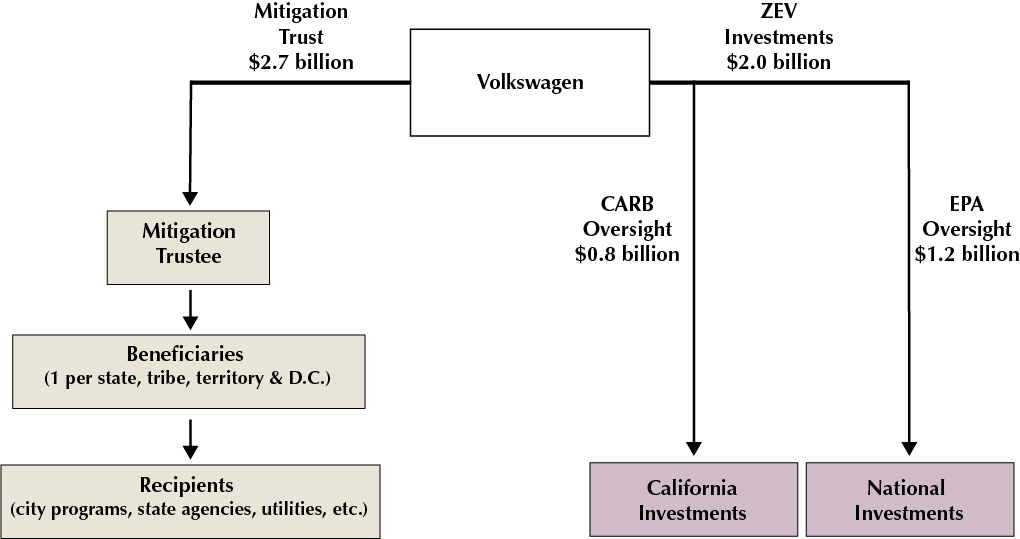 The Mitigation Trust will allocate funding to each state to spend on reducing the NOx emissions that were created by the altered VW vehicles. The funding will be disbursed within the state by one lead agency that must be approved by an appointed trustee. The trustee, investment firm Wilmington Trust, was selected in March. Once all parties confirm Wilmington Trust, which could happen any day, the Trust Effective Date will be established. The Trust Effective Date is essentially the “starter’s pistol” that will set the process of distributing Mitigation Trust funds to states in motion. The general timeline for applying for and receiving funds is shown below, though several deadlines are flexible and may proceed more quickly than the maximum amount of time allocated.

Cities and businesses should contact and work actively with the lead agencies in their states to identify and promote opportunities to replace older diesel engines and vehicles. Several states have already identified their lead agencies or principal contacts and are beginning to design plans for how the available funding will be spent. Though funding can be spent over 15 years, as much as two-thirds can be spent within the first two years. Therefore, it is in the best interest of cities or businesses to engage with state agencies early.

CARB has not yet approved the California Investment Plan out of concerns for social equity and EV charging market competitiveness, sending a letter to Electrify America requesting that a supplemental plan reflect greater investments in low-income communities. Once CARB approves a plan, California cities and businesses should also consider opportunities to work with Electrify America to optimally site charging stations during the first 30-month round of investments. During the next round of investments, slated to begin in late 2019, proposals to Electrify America may be more successful if they incorporate CARB’s concerns and demonstrate air-quality benefits to low-income communities or a need to fill regional EV charging gaps.

With action on both VW settlements’ funding programs taking shape, cities and businesses should be prepared to identify opportunities to reduce NOx emissions and promote EV adoption.

In October 2016, the U.S. government granted final approval of a $14.7 billion settlement against Volkswagen (VW) for equipping more than 500,000 of its diesel vehicles to cheat U.S. vehicle emissions tests in violation of the Clean Air Act. Volkswagen …