US can reach its Paris Agreement goal

After witnessing the historic signing of the Paris Agreement by 175 nations, we now need to turn our attention to fulfilling its promise.

As its nationally determined contribution to the agreement, the United States set a goal of reducing net greenhouse gas emissions 26 to 28 percent below 2005 levels by 2025. In a new paper, C2ES outlines how expected and in-place policies could get us close to the goal line — reducing emissions by as much as 22 percent. Getting the rest of the way can likely be achieved through a mix of additional policies, city and business action, and technological innovation. 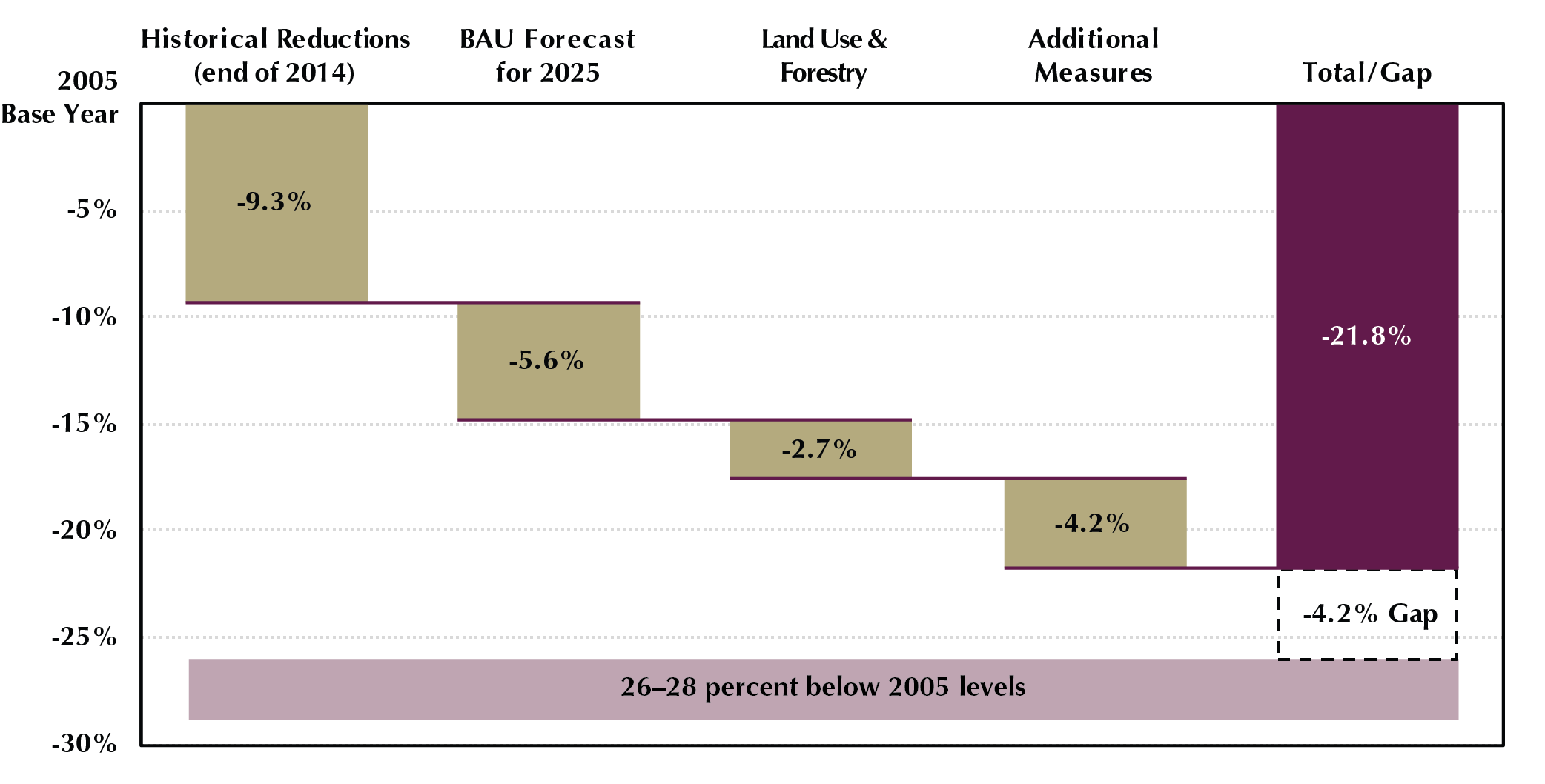 The chart above illustrates how U.S. emissions can be reduced almost 22 percent below 2005 levels by 2025. The rest of the gap with the INDC submitted for the Paris Agreement can be achieved through a mix of additional policies, city and business action, and technological innovation.

First, let’s look at how we can get to a 22 percent reduction.

U.S. net emissions are already down more than 9 percent from 2005 levels due to market- and policy-related factors, including a shift in electricity generation from coal to natural gas, growth in renewable energy, level electricity demand, and improved vehicle efficiency.

The C2ES business-as-usual forecast, drawn from a number of analyses, projects an additional 5.6 percent reduction in net emissions through such policies as greenhouse gas standards for vehicles and the Clean Power Plan.

The rest of the anticipated emissions reductions is expected to come from new, higher estimates of future carbon sequestration and additional measures under development, including steps to strengthen fuel economy standards for medium- and heavy-duty trucks, reduce methane emissions in the oil and gas sector, and reduce hydrofluorocarbons (HFCs).

Now, how will we address the remaining gap of at least 270 million metric tons carbon dioxide equivalent?

Additional federal policies would help. For example, greenhouse gas standards could be set for major industrial sectors under section 111(d) of the Clean Air Act, the same section that underlies the Clean Power Plan.

Technological advances that lower the cost of emissions reduction will also undoubtedly play an important role. Over the next five to 10 years, battery storage technologies are expected to improve by a factor of 10, which would support the integration of more renewable generation. A promising design for a natural gas power plant with nearly 100 percent carbon capture will enter the demonstration phase next year and could be commercialized soon after. And agricultural advances are leading to more sustainable crops able to sequester more carbon dioxide in their root systems.

Stronger efforts by cities will also be critical to filling the gap. A growing number of cities are working to improve the energy efficiency of residential and commercial buildings, which account for for 41 percent of total U.S. energy consumption. Greater adoption of Property Assessed Clean Energy (PACE) programs, which help finance energy efficiency and renewable energy projects, could significantly reduce city energy demand. Similarly, city programs to build out infrastructure to increase the adoption rate of electric vehicles will, in-time, appreciably lower transportation-related emissions.

Companies, too, will play a key role. Twelve leading companies signed the C2ES statement calling on governments to quickly join the Paris climate pact and pledging to work with countries toward the domestic measures needed to achieve their national emissions-cutting contributions. More than 150 U.S. companies with a combined market capitalization in excess of $7 trillion joined the American Business Act on Climate Pledge – committing to reduce emissions, increase renewable power, or finance climate efforts. And the White House is calling on more companies to join the initiative.

The United States has significantly reduced its greenhouse gas emissions over the past decade. Cutting emissions 26 to 28 percent below 2005 levels by 2025 is a challenging goal. But many options remain untapped, and concerted efforts across multiple fronts can get us across the goal line.

How should we measure success at COP26?