Last week, Hubei Province became the sixth jurisdiction in China to launch a pilot carbon emissions trading program, joining Shenzhen, Shanghai, Beijing, Tianjin, and Guangdong Province. In the coming months, two additional programs will be introduced in Chongqing and Qingdao. In total, the eight pilot programs will cover an estimated one billion metric tons of carbon dioxide (MTCO2), second only to the European Union’s Emissions Trading System. The pilot trading programs are part of the strategy laid out in China’s 12th Five-Year Plan (2011-2015) to reduce carbon intensity (CO2 emissions per unit of GDP) by 40-45 percent from 2005 levels by 2020.

As the world’s largest energy consumer and emitter of carbon dioxide, China’s efforts to rein in emissions are significant at both the global and national level. In addition to the carbon trading pilots, China recently announced measures to limit coal to 65 percent of primary domestic energy consumption by 2017, down from 69 percent in 2011, while also banning new coal generation in Beijing, Shanghai, and Guangzhou.

To meet its 2020 emissions goal, China is expected to introduce a timeline for a national carbon emissions trading program in its 13th Five-Year Plan (2016-2020). The plan, in addition to supporting China’s domestic targets, could also complement broader goals that will be outlined in a new post-2020 international climate agreement that countries will formulate in late 2015. In February, the United States and China pledged to strengthen bilateral cooperation in developing their respective post-2020 climate commitments. In the lead-up to 2015, China’s pilot trading programs will present policymakers with a set of unique policy options and data points to use in crafting a national program. So, it is worth exploring some key elements. 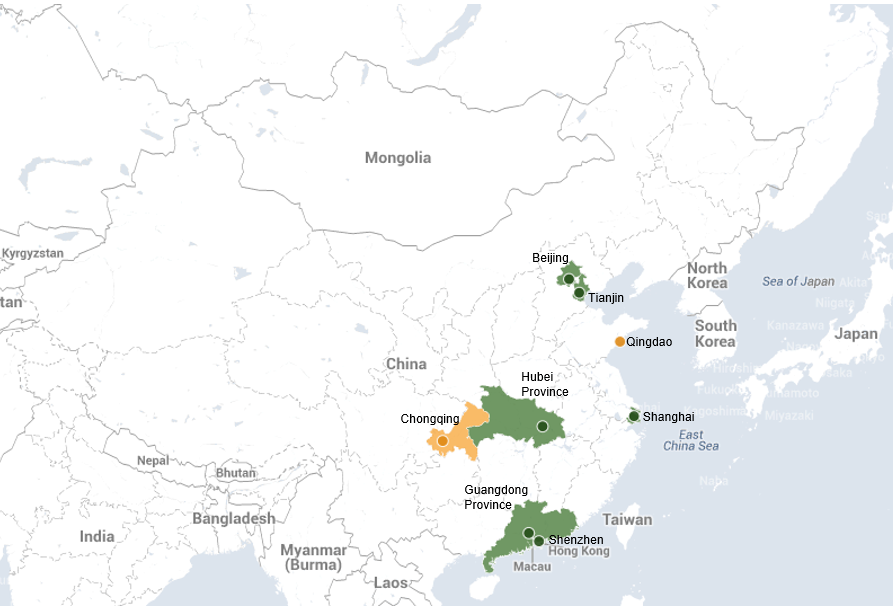 The most notable distinction between China’s pilot programs and other existing carbon trading programs — such as the European Union’s Emissions Trading System, California’s program, and the Regional Greenhouse Gas Initiative — is the use of carbon intensity targets, rather than absolute carbon emissions caps. The targets range from an 18 percent reduction in carbon intensity in Beijing to 21 percent in Shenzhen. With intensity targets, carbon emissions may actually increase over time. A report released by the Australian National University illustrates that a 6-9 percent annual GDP growth rate in China between 2013 and 2020 would lead to a 9-36 percent net increase in carbon dioxide emissions, even while achieving the 40-45 percent emissions intensity target.

At their core, each pilot operates along similar allowance allocation procedures. Each program has established an emissions allocation supply based on emissions data reported by covered industries. Allocation of allowances, however, varies across each program, with free allocation being lowest in Shenzhen, Tianjin, and Hubei at 90 percent. To stimulate trading activity, each program allows trading not only among covered entities, but also with certain third-party participants.

The threshold for compliance ranges from annual emissions of 5,000 MTCO2 in Shenzhen, to 20,000 MTCO2 and above in Shanghai, Guangdong and Tianjin, to 60,000 metric tons of coal consumption annually in Hubei. As China’s fastest growing municipal economy, Tianjin has set aside 15 percent of its credit supply in reserves to adjust for increased demand from new entrants and third-party investors. As the rules currently stand, offsets can be used to satisfy only 5 percent of a company’s obligation amount in Shanghai, but more than 15 percent of an obligation in Hubei. Further, Hubei varies from the other pilots in that it prohibits firms from setting aside allowances for future compliance, a process known as banking.

Differences among the programs reflect the unique economic structures of each municipality or province. Shanghai, for example, is the only pilot to include domestic aviation under its scope of compliance, whereas Chongqing will cover energy-intensive industrial sectors exclusively. Further, the Beijing program will account for indirect, cross-border emissions, given that 70 percent of Beijing’s electricity is generated outside of the municipality. As the program with the largest emissions coverage, Guangdong’s most closely reflects China’s national carbon dioxide emissions portfolio due to its vast expanses of urban and rural environments. 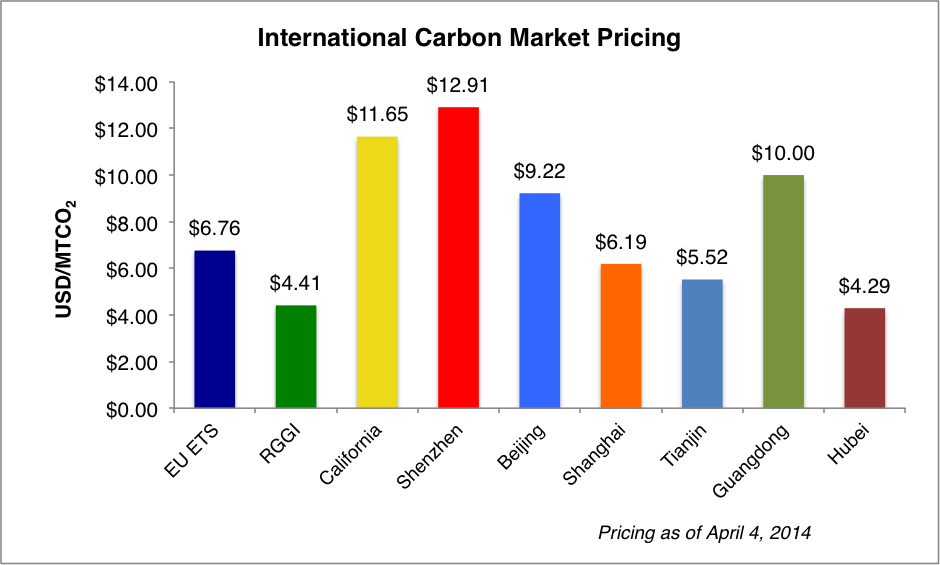 Taken together, these pilots represent a substantial effort by China’s government to employ market-based policies to reduce carbon emissions. Trading is already taking place, most notably in Shenzhen. In the first week of April, prices on the Shenzhen Emissions Exchange held slightly below $13/MTCO2. In Beijing and Guangdong, prices hovered between $9-10/MTCO2, with prices in Tianjin and Shanghai settling around $5.50-6.20/MTCO2. Inaugural trading in Hubei saw the lowest price of the six existing programs at $4.29 per credit.

Naturally, each pilot program must overcome challenges to ensure efficient levels of carbon abatement. In doing so, China has taken the right steps by issuing a mandate requiring all companies with emissions over 13,000 MTCO2 in 2010 to begin surrendering future emissions data by 2015. This data will help China develop a national carbon emissions inventory, thereby improving the accounting accuracy of each pilot program in the short-term, while avoiding structural instability due to allowance over-supply in the long-term.

Administrators of China’s pilot programs are likely to collaborate and explore regional linkages with each other, and even with voluntary programs like Qingdao. To be sure, China’s implementation of pilot-level emissions trading programs will provide invaluable information and technical experience when the time comes to scale up to a national emissions trading program — one that is poised to become the world’s largest in the coming years.

China’s provinces learn how to reduce emissions with trading