Sales of electric vehicles (EVs) in the United States nearly doubled last year—and with consumer acceptance broadening, sticker prices dropping, new models on the way, and policy support growing, the outlook is even better for 2014.

In 2013, EVs increased their market share by 70 percent from 2012 levels, while all-vehicle sales grew 8 percent to reach a six-year high. Still, EV sales continue to lag forecasts made when these cars hit the market in late 2010, accounting for less than 1 percent of new light-duty vehicle sales. The strong growth in vehicle sales is mostly due to rising sales of gas-guzzling pickup trucks. 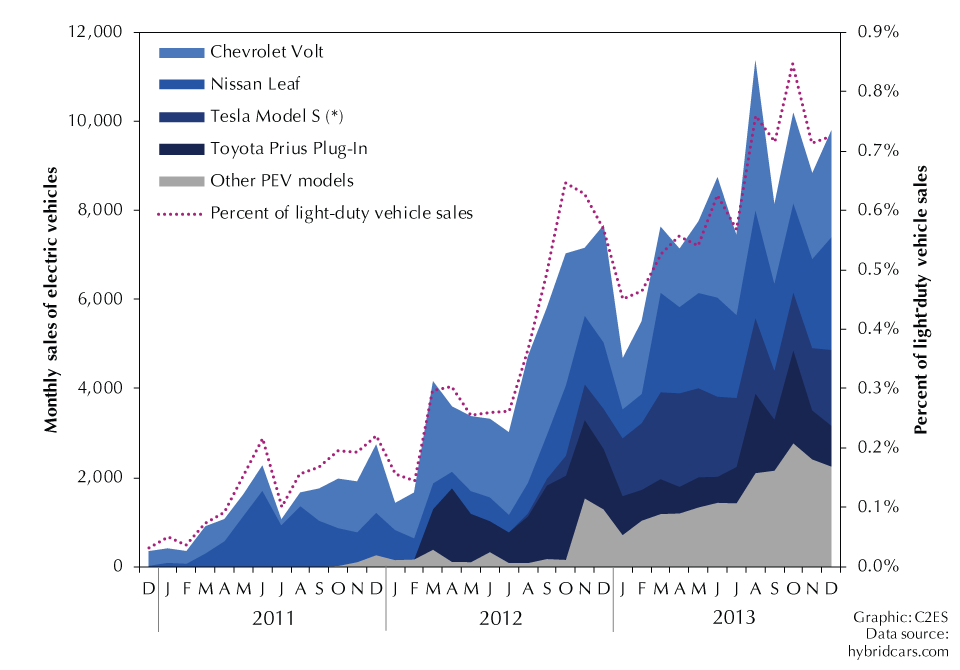 Optimism for EV market expansion is warranted, however, not only due to steady sales growth but also due to three key developments in 2013.

1. Electric vehicles are winning broader consumer acceptance. Sixty percent of car buyers would consider purchasing an EV, according to a recent poll commissioned by the Consumers Union (the policy arm of Consumer Reports) and the Union of Concerned Scientists.

There is also evidence that EVs are attracting a wider variety of consumers. Nissan reports rising demand for its LEAF from consumers representing a broader range of age, ethnicity, income, and education levels. Nissan’s director of EV sales and marketing, Erick Gottfried, said, “We’re beyond early adopters and have reached a point where we are selling to a practically-minded consumer who is looking at the monthly economic savings of driving the car.”

2. EV prices are dropping and options are growing. In 2013, some automakers cut the prices of EV models considerably as they competed against each other and against conventional models. The Chevy Volt racked up the highest monthly sales total ever for an EV after a $5,000 price cut in August. The Nissan LEAF became the top-selling EV in Atlanta after the base model cost dropped to less than $17,000 including federal and state tax incentives. As a result, Atlanta has been the highest-selling market for the LEAF for five straight months and the fifth-largest market for EVs overall.

At the same time, the number of models popular among EV buyers across the country doubled. In 2012, three models (the Nissan LEAF, Chevy Volt, and Toyota Prius Plug-in) accounted for 87 percent of EV sales. In 2013, these models accounted for only 59 percent of EVs sold, as sales of Tesla’s Model S and Ford’s C-Max Energi and Fusion Energi grew. While the size, body type, and range options offered by EV models are still limited compared with conventional vehicles, more options are on the way. VIA Motors is launching the first high-volume production lines of EV pickup trucks and vans (based on GM vehicles). BMW will be selling its i3 luxury 5-door EV this spring. And Volkswagen is planning to release an electric version of its Golf model. Many consumers will see their first glimpse of these new models at the Detroit Auto Show later this month.

3. Policy momentum is building in support of zero-emission vehicles. In October, eight states gave EVs a big boost by signing a Memorandum of Understanding on zero-emission vehicles (ZEVs) with the goal of putting 3.3 million electric and fuel cell cars on the road by 2025. Together, these states (California, Connecticut, Maryland, Massachusetts, New York, Oregon, Rhode Island, and Vermont) account for about a quarter of the auto market, so their commitment is significant. The agreement calls for coordination on actions and policies, such as tax incentives, HOV lane access, and utility policies, to help advance ZEV deployment. For now, most attention will be on EVs until fuel cell vehicles begin to the hit the road in the next few years.

The potential for market expansion is significant. Though fewer than 200,000 EVs are on the road today in the United States, the CU/UCS poll found that EVs could accommodate the travel needs of 45 million households, nearly half of all U.S. households. This finding was based on the reported average number of passengers per trip, hauling needs, and existing household access to charging, and that 69 percent of U.S. drivers drive less than 60 miles on weekdays—well within the range of most of today’s EVs.

C2ES will continue to work with governments, auto and energy companies, and other stakeholders to boost consumer awareness and acceptance of EVs, improve the technology, and formulate and implement supportive policies that will help further nudge EVs toward the mainstream. These efforts will unlock the many benefits that EVs offer: increased energy security, lower fuel costs, reduced air pollution, and, of course, lower carbon emissions.